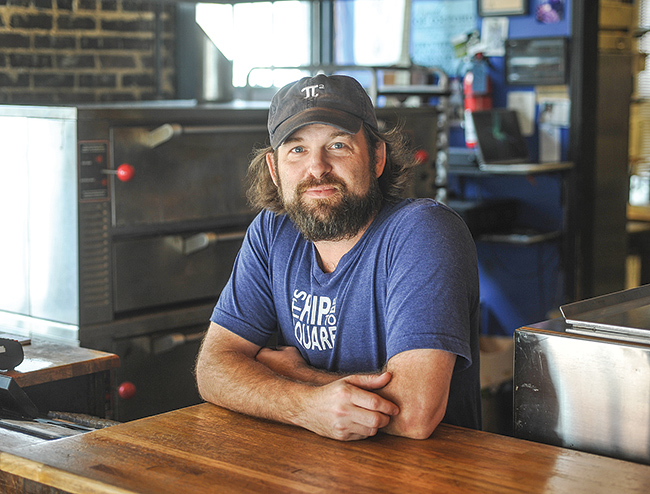 In Oxford, it’s always hip to be square.

Tate Moore, 41, realized that and created an Oxford business that promotes that idea.

The business that does, indeed, serve square pizzas, is decorated with posters, photos, and paintings – many of which tell a different story about Oxford.

The Caldwell, Ohio, native came to Oxford to attend the University of Mississippi in 1992.

“This is my ninth season to be open,” he said.

Moore said he got the idea from a hometown pizza eatery in Ohio.

“This is the pizza I grew up with as a kid,” he said. “Every dough ball that I roll out is a little piece of my childhood.”

Moore’s family owned a business that manufactured doors, and he frequently ate at the pizza shop across the street that also served square-shaped pizzas.

“I just have always felt, to find a job in Oxford, it is very difficult,” he said, “so I had to create something. And I thought people would appreciate the style of pizza I grew up with as a kid.”

Moore said his pizzas are double- baked and crispy with provolone cheese that is authentic to the area he’s from.

Pizza isn’t the only thing Moore creates. He’s been making music since 1994 as a member of the Kudzu Kings.

The Oxford band that has been described as a mix of country music, bluegrass and rock and roll toured together more than a decade.

Moore said he became interested in Oxford after driving from Dallas, where he lived at the time, to complete a gig delivering a guitar to the Delta Blues Museum in Clarksdale.

“After delivering it, we drove over to look at Ole Miss,” he said. “Needless to say, I was sold. When I saw downtown Oxford, there was no question where I was going to school.”

Moore attended Ole Miss on a theater scholarship and graduated in 1996, two years after founding the Kudzu Kings.

“We were playing 200 days a year by my senior year,” he said. “We still play, and we have several shows coming up this fall. Now, we might play six or seven shows a semester.”

Moore said the band stopped touring around 2007. That’s when he opened Square Pizza.

The pizza shop, a tribute to the 1990s, contains lots of Oxford music memorabilia from the last couple of decades.

“If you’re in search of a place that resembles The Hoka, this is it,” Moore said, referring to a former Oxford landmark.

The restaurant even has a few old theatre seats from The Hoka inside.

“On a game day weekend, instead of waiting three hours for a reservation, you can always get a large pizza in like 30 seconds at Square Pizza,” he said. “We’ve always got a large pizza ready waiting on you.”

Are there similarities in cooking pizzas and playing music? Moore thinks so.