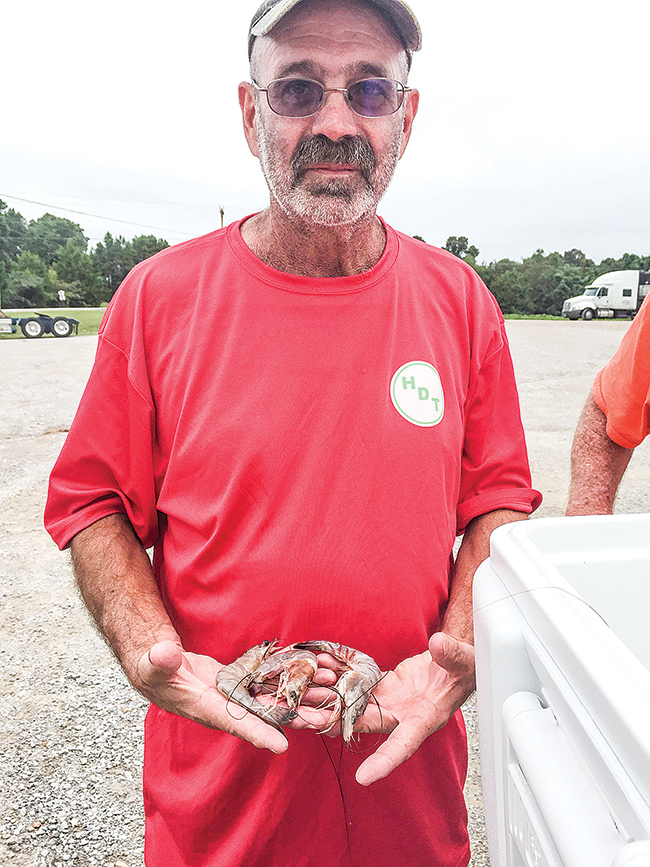 Ecru native Ron Coker, 54, was found standing beside a pickup truck Saturday morning with a sign in front of it announcing what he and a friend had for sale. “We’re selling shrimp today,” said Coker. The two had several white coolers filled with large shrimp in the back of the truck, and they greeted customers who stopped to inquire about the price.

Coker grew up in Pontotoc County and attended school in Ecru until North Pontotoc school was built. He began going to school there in third grade.

Some of his fondest memories growing up were fishing with his father and raiding watermelon patches.

After school, he got married, had a daughter, and now he’s the grandfather of three, including twins.

When he’s not selling shrimp, he builds houses.

“Next week, we’re going to have pickled quail eggs, dressed quail, shrimp and catfish,” he said. “They came straight off of a boat yesterday.

“These came straight out of the ocean. They’re not like crawfish. They are from saltwater.”

The shrimp sell for $8 a pound.

“If you get them in the grocery store, they’re about $16 a pound,” he said. “But I buy them straight off the boat, so I get them cheaper.”

Coker said he’ll be selling shrimp to “make an extra dollar” in an area beside Littlejohn’s Grocery in Lafayette County on Saturdays beginning around 6:30 a.m.