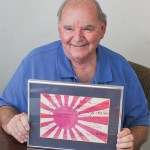 Brian Pray holds a card that was presented to his stepfather, Robert E. Roy, who was aboard the USS Missouri when Japan surrendered on September 2, 1945. 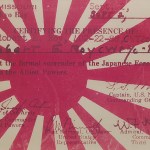 Robert E. Roy was aboard the USS Missouri when Japan surrendered on September 2, 1945. 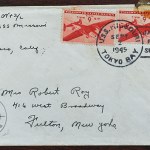 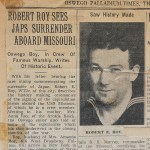 Seventy years ago today, the Japanese signed surrender documents aboard the USS Missouri in Tokyo Bay and brought World War II hostilities to a close.

As this special day is remembered, the EAGLE visited Oxonian Brian Pray, whose stepfather, Robert E. Roy, was a sailor aboard the Missouri and wrote a manuscript of the history of the ship until it returned to the United States after the war.

Roy, who passed away in 1996, compiled the memoir after getting back to his home in Oswego, New York, and completing extensive research in the Oswego library. Roy used the ship’s newspapers, his own experiences and information he uncovered while at the library to compile the manuscript.

Pray, who was a member of the U.S. Army during the Vietnam War, has the only copy of the memoir, as well as every newspaper that was printed aboard the ship, a surrender card and one envelope stamped with the USS Missouri.

“It was a significant event in his life to be aboard the Missouri,” Pray said. “He didn’t have any children of his own and he and I had a pretty special bond because both of us had fairly significant military experiences. I’ve got almost 1,500 combat hours, a distinguished flying cross, 40 air medals and a couple of bronze stars. So, I’ve been christened, and he knew that.”

Three passages from the memoir are quoted below, exactly as they appear in the manuscript, to commemorate the Japanese surrender.

••• On Aug. 28, 1945, Roy recounts a Japanese admiral approaching the USS Missouri in a tugboat to make arrangements for the surrender: “The only floating object outside of our fleet is a skimpy old tugboat. Approaching our anchorage, we wonder who this is. Moments later we find out.

The squawk box: ‘Attention, the Missouri. Japanese Admiral approaching the ship.’ The tug approaches the port gangway, asks and receives permission to land a passenger. It is the Admiral in command of the Naval base, who has boarded us to make arrangements for the surrender of the base to Admiral Halsey.

As this old man steps aboard ship, he looks downcast and disheartened as if he would have preferred a more pretentious ship for this errand of surrender. But such vessels were resting on the bottom or were unseaworthy. At the sight of this antiquated tug, one could not help but contrast the power and might of the 3rd Fleet against this antiquated remnant of the once mighty Japanese Navy. On the base proper there is no sign of life and to all appearances the Japs are living up to Admiral Halsey’s order of abandonment.”

••• On Sept. 1, 1945, Roy comments on a 30-star flag that was present during the surrender. The same flag was flown when the Treaty of Amity and Commerce, which opened Japan to world commerce in 1853, was signed between the United States and Japan: “An hour later the squawk box sounds again. ‘Men, this is Captain Murray. The famous 30-star American flag, flown by Commodore Oliver Hazard Perry, when he concluded the treaty that opened Japan to world commerce in 1853, has arrived from the States by special courier, and it will be on display during the ceremony.’”

••• On Sept. 2, 1945, Roy describes the surrender ceremony and points to the drama added to the scene by the presence of American generals who had been prisoners of war. In his interview with the EAGLE, Pray describes the signing as the “most poignant” part of the manuscript, as Gen. Douglas MacArthur invited his friend Gen. Jonathan Wainwright to participate in the signing before others. Wainwright had been through the Bataan Death March, a 65-mile forced transfer of prisoners to Camp O’Donnell by the Japanese Army. Thousands died during the march, which was later determined to be a war crime: “Exactly at 0845, bells ring, whistles shrill, the bugle emits the blast of ‘Attention.’ Stepping from the destroyer which transported him is General Douglas MacArthur, followed by General Wainwright. The newsmen and photographers are almost knocking each other over to get vantage points for cameras and to jot down snatches of conversation, as General MacArthur is greeted by Admirals Nimitz, Halsey and Carney, Halsey’s chief of the staff. However, all eyes and ears are focused on General Wainwright. As he makes the main deck a tremendous cheer reverberates throughout the length and breadth of the ‘Mo.’ Former members of his staff rush forth and embrace him one at a time. This is a very happy climax for this great man after years of imprisonment, and of all the big wigs aboard he is probably the most noted.

(Perhaps the most dramatic aspect of the entire Surrender Ceremonies lies in the fact that men, who for years had been driven and beaten by Japanese guards, were permitted to witness the abject surrender of the government, and the people that imprisoned them. General Jonathan N. Wainwright, the great leader of Bataan and Corregidor, whose brave leadership in the tragic early days of the war gave our great country time to prepare for fighting, headed this list. British General Percival, another great solider, was also a prisoner of these barbarians.) ….

General Douglas MacArthur examines the document spread out before him, wipes his glasses, turns to the British delegation and invites British General Percival to approach the table. As Percival approaches, MacArthur turns to General Jonathan Wainwright and invites him to approach. The The Generals take a position to either side of General MacArthus. MacArthur now takes a pen from his pocket, signs one letter of his name on the document, then he turns and hands this pen to General Wainwright. He removes a second pen from his pocket, finishes the second letter of his signature on the document, turns to General Percival and hands him the pen. He uses a third pen, and a fourth. Then he reaches into his pocket and removes the fifth pen, which is undoubtedly his own, and completes his signature. He invites the representatives of the United States to sign.”

Pray hopes that the L-O-U community will remember that the surrender of Japan has a profound significance in our lives today.

“It’s an important day in the history of this nation and I say that with an awful lot of respect for the men and women who served,” he said. “It was an all-out effort and I just hope that these younger people understand what these men and women went through to ensure our freedoms that we have today. Let’s just put the cards on the table — if it hadn’t been for the U.S. service people, we’d be speaking Japanese or German today.

“The saddest thing is that all of these men who had been through this had prayers that this would be the last time our nation ever had to win a war,” Pray continued. “Every one of these famous men who were battle-scared never wanted to see anything like this ever happen again, and all we can do is turn on the news tonight. How terrible is that?”