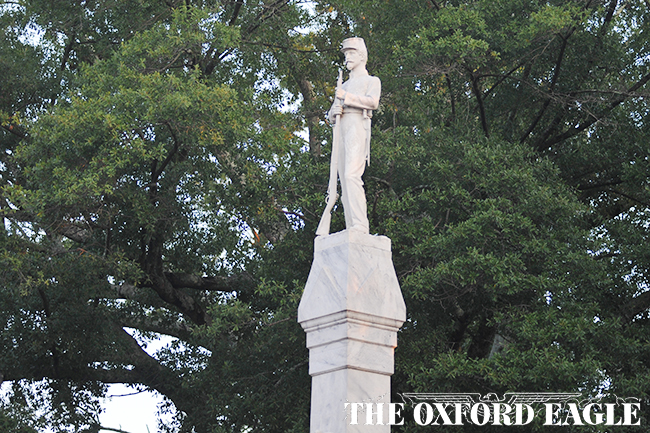 A confederate statue is located in front of the Lafayette County Courthouse, in Oxford, Miss. on Thursday, September 3, 2015.

Drive around the Square in Oxford, and you’re bound to notice the Confederate memorial statue in front of the Courthouse.

Local historian Jack Mayfield said the statue is dedicated to the men of Lafayette County who fought in the Civil War.

“He’s got his rifle in front of him, and he’s leaning on his rifle,” said Mayfield, describing the Confederate soldier standing above the traffic.

The statue isn’t unique to Oxford. Mayfield said other towns have similar statues. But the memorial has been uniquely depicted in some of William Faulkner’s books, such as “Requiem for a Nun.”

“It’s a pretty short book,” said Mayfield. “It’s written as a play. There are three acts in the play. The first one is at the courthouse. Faulkner writes about the clock going off and chiming, and the birds would roost on the clock in the Square. He sets the stage for Yoknapatawpha and Jefferson in that book.”

In 2010, The New Yorker published a story about Oxford in which the writer described the Confederate statue on the Square.

He noted that the front of the statue reads: “In memory of the patriotism of the Confederate soldiers of Lafayette County, Mississippi. They gave their lives in a just and holy cause. Erected 1907.”

The left side of the statue reads: “A living tribute to the memory of our dead heroes by the patriotic daughters of Lafayette County, Mississippi.”

The right side reads: “A tribute to our Confederate dead by their surviving comrades.”

And the back reads: “The sons of veterans unite in this justification of their father’s faith.”

The book “William Faulkner and the Tangible Past: The Architecture of Yoknapatawpha,” by Thomas S. Hines, says “public sculpture was a crucial genre of the Yoknapatawpha landscape.”

The book says the Confederate Monument on the Oxford and Jefferson Squares that was dedicated in the early 20th century to “those who died in a just and holy cause” faced south from the courthouse and “became for Faulkner a crucial symbol in work after work, as in ‘Sartoris,’ where the Confederate soldier stood, his musket at order arms, shading his carven eyes with his stone hand.”

The book says Faulkner’s words here don’t describe the statue on the Oxford Square, but do describe the Confederate statue at Ole Miss a mile away.

“This monument, which Faulkner knew as well as he knew the one in town, contained an inscription from Herodotus, in Greek, which he never used, but should have liked: ‘Go, stranger, and to Sparta tell, that here, obeying her commands, we fell,’” the book reads.

The book says Oxford is one of the few small Southern towns with two Confederate monuments, “a result of a compromise between two warring factions of the United Daughters of the Confederacy, one group wanting the statue placed on the Square, the other arguing that it should be on the campus.”