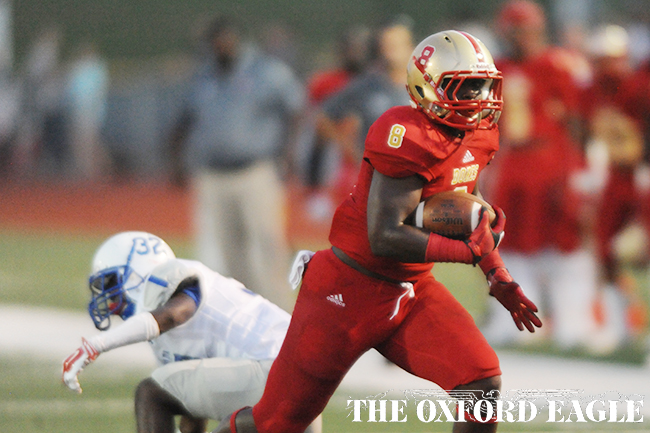 Lafayette’s offense has featured a little more balance than it normally gets from its run-heavy spread offense in the first two weeks of the season.

The Commodores didn’t need it on Friday.

At least when they got out of their own way.

Senior running back Tyrell Price ran over, around and through Grenada’s defense, helping Lafayette overcome a sluggish start and hold off the Chargers for a 20-14 win at William L. Buford Stadium. Price exploded for 272 yards on 36 carries as the Commodores (3-0) remained unbeaten heading into this week’s showdown against crosstown rival Oxford.

“I was ready. I was hungry to get the ball.”

Price capped each of the Commodores’ first two drives of the second half with 14- and 12-yard touchdown runs to put Lafayette up for good. Lafayette trailed 7-3 at the half thanks to three turnovers and 10 penalties despite holding Grenada to minus-12 yards in the first two quarters.

But Price and his offensive line were just getting started.

The Commodores, the state’s top-ranked team in Class 4A, committed 18 penalties in all but stayed out of their own way long enough to begin imposing their will on the ground in the final two quarters. Running behind guard Matt Toles and tackle Eli Johnson, an Ole Miss commit, on the right side for a majority of the second half, Lafayette piled up 214 of its 325 rushing yards in the last 24 minutes.

His 109-yard first half got him warmed up for a blistering second half where he piled up 163 yards on 21 carries. Price at one point broke through each attempted arm tackle of seemingly every Grenada defender during a 25-yard run midway through the fourth quarter that would’ve been his third touchdown if not for a holding call.

“We kept giving it to 8,” Robertson said, referring to Price’s jersey number. “There’s going to be games like that. They did some things to take away our perimeter passing game with some man coverage at times, and so we just kept giving it to 8 right there.”

Still, Lafayette had to recover Grenada’s attempted onside kick with a little more than a minute to play to secure the win. The Commodores committed their fourth and final turnover a possession earlier when quarterback Will Ard was hit and lost his third fumble of the night deep in Lafayette territory, and Grenada found the end zone five plays later on Deon House’s 4-yard touchdown run to draw the Chargers within 20-14 with 1:14 left.

But the short scoring drive was the only real success Grenada had moving the ball on a swarming Lafayette defense, which surrendered just 20 yards of offense. Grenada averaged 8.9 yards a carry entering the night but finished with minus-6 yards on the ground.

“We try to pride ourselves on stopping the run, and I think we were able to do that tonight,” Robertson said.