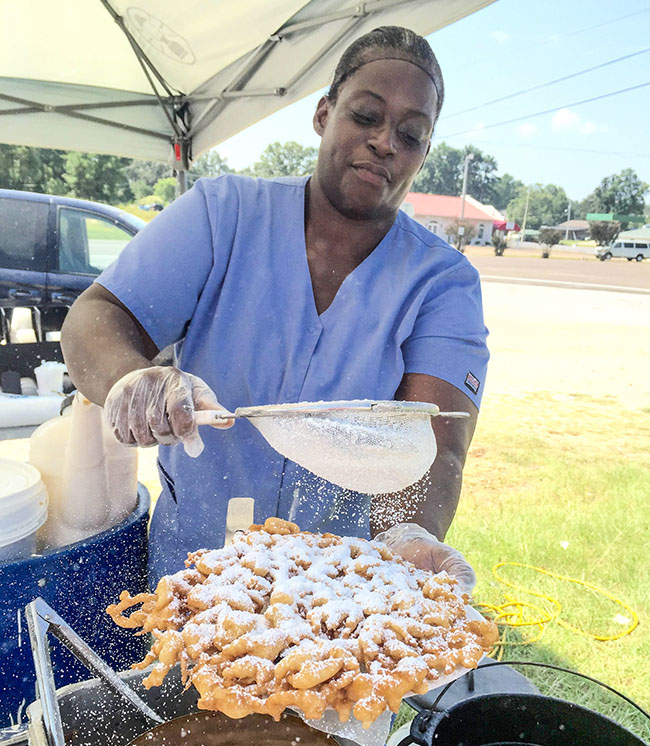 Bridgette L. Gordon-Booker of Abbeville cooks up funnel cakes to sell for $5 each near Littlejohn’s Grocery on Saturday. She began cooking at age 7 and currently operates B&E BBQ and More.

Bridgette L. Gordon-Booker has been cooking most of her life.

Saturday morning, she was found near Littlejohn’s Grocery in a parking area selling funnel cakes for $5.

Gordon-Booker grew up in Abbeville.

Gordon-Booker said her grandmother and the older women in the community taught her how to cook.

“My mother got killed in a car accident when I was 19, and my grandmother has taught me how to cook since I’ve been young,” she said. “My grandmother took me in and practically raised me, because we stayed right beside my grandmother. I could just walk from my trailer to my grandmother’s house.”

“She was an old-fashioned woman who liked to cook wildlife and everything else — chicken and dressing, chitterlings, fried chicken,” she said. “You name it; we cooked it.”

Gordon-Booker said she always cooked at family reunions and other occasions. This led her to create her own business.

“I used to work at Georgia-Pacific for eight or nine years, and they laid me off three times,” she said. “I told my husband I want to cook for myself.”

Today, she operates a business called B&E BBQ and More.

She is currently providing food for workers at a construction site.

“Next year, I’ll be at Ole Miss, and they are going to let me sell funnel cakes at their concessions,” she said.

She said many people stopped on Saturday morning to buy a funnel cake.

“It only takes 30 seconds on each side to make it,” she said, while demonstrating how to make the cake. “This is kind of like pancake batter. I make it out of flour, milk, cinnamon and eggs.”

Funnel cakes sell for $5 each.