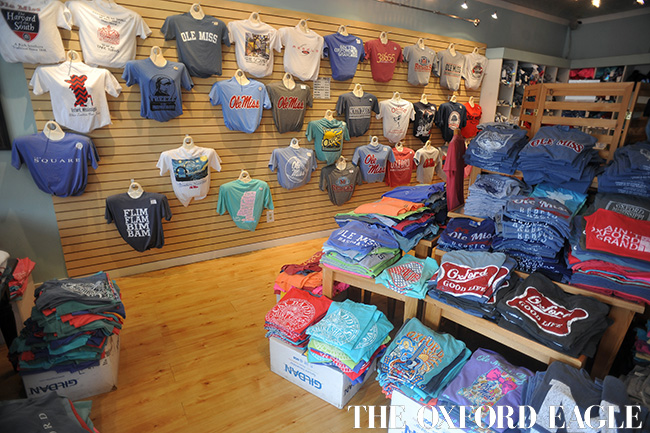 Take a stroll on the University of Mississippi campus, and one of the first things you’ll notice about students is T-shirts are the uniform attire.

Girls who attend classes are rarely glammed up during the day, opting to wear oversized T-shirts and shorts instead.

This is good news for local T-shirt companies that see a boost in sales when students return to campus each year.

Arin Ladner, 20, is a businesses administration major and a sales associate at Oxford T-shirt Company at 1453 S. Lamar Blvd.

“I do wear shorts and a T-shirt every day to class,” she said.

The store receives many orders from colleges, churches and hospitals.

“Our business does increase when the college kids come back after the summer and school is in session,” Ladner said.

They recently filled an order for 5,000 T-shirts, but people generally order 100 or more T-shirts at a time.

“We actually have our own art department,” she said.

The business sells some of its own designs in the store.

You can buy Deep Fried T-shirts at 2618 West Oxford Loop.

“We’re in the South, and everything is better when it’s deep fried,” said owner Matt Wymer, who has worked as a cook at Proud Larry’s, Bottletree Bakery and elsewhere.

“The process of making T-shirts reminded me of frying,” he said. “You put colored grease on the shirt and cook it, and it comes out nice and crispy on the other side. We make hot fresh cotton.”

Wymer studied print-making at the University of Mississippi. He was planning to attend graduate school and study anthropology, but he began making T-shirts full time.

During the summer, the company fills many orders for vacation Bible school T-shirts and summer events at the university.

“Now, there’s a lot of football-oriented stuff and rush,” he said. “In the spring, you get a lot more of the clubs.”

Wymer said the company also sells some of their own designs that include an Oxford-themed shirt, a landshark T-shirt, and they are hoping to add a shirt about the Grove. They recently became licensed to print fraternity and sorority T-shirts.

The company celebrated its 10th anniversary in July.

“I like this job because I feel like I make people’s dreams come true,” Wymer said. “They come to me with half an idea, and they leave with something that makes their event. The smile on people’s face is pleasing.”

Haley Toups, 21, is a junior psychology major at the University of Mississippi, who also works at Cat Daddy’s on the Square. T-shirts are printed at Ink Spot at 1711 University Avenue in Oxford and sold at Cat Daddy’s.

“All I wear is T-shirts, ever,” she said. “The trend on campus is for girls to wear larges and extra larges, even if they weigh like 100 pounds. Everyone wants to be comfortable going to class.

“I do it too, and I can’t even explain why I wear a shirt that doesn’t fit me correctly. It’s just a Southern, sorority-type style that people have coming on.”

Toups said the T-shirt businesses at Cat Daddy’s is steady after orientation is over at the university because visitors come to the Square and buy shirts.

Cat Daddy’s most popular T-shirt is Grove-themed. Another favorite is one that reads “Ole Miss” in cursive with a “Hotty Toddy” banner underneath.

“We also have a really popular shirt that says ‘Oxford,’ she said. “It’s all caps. It’s really simple. A lot of people like those.”