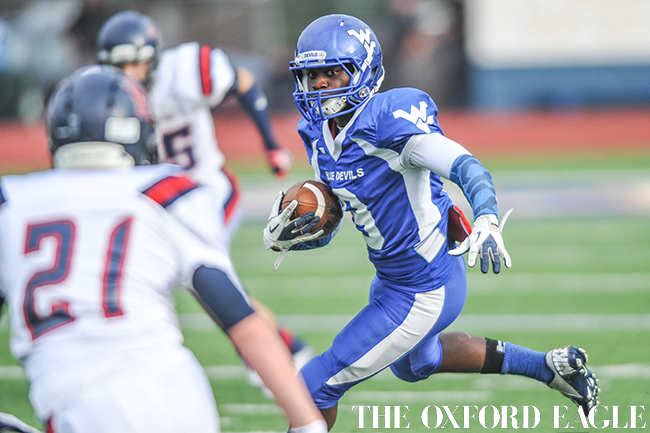 Water Valley's Quez Towns runs upfield after making a catch against Nettleton in a preseason jamboree at Bobby Holcomb Field in Oxford, Miss. on Saturday, August 15, 2105.

After last week’s 50-12 loss at Calhoun City, Water Valley coach Brad Embry was not pleased with his team’s overall effort on the field. The Blue Devils (1-2) welcome a Pontotoc team (1-2) to Bobby Clark Field on Friday with the goal to execute the little things that Embry felt cost them a week ago.

“The score was disappointing,” Embry said. “One thing we talked about was paying attention to detail as far as the little things in football. Taking the proper steps, hand placement. Playing hard is not enough, and I felt like we dropped our heads at times. It’s human nature. Sometimes it causes you to slow down and not do your best. I thought we did that.”

In an attempt to remedy the execution issue, Embry and his staff went back to the drawing board and attempted to simplify things for his players. It is not necessarily starting back at square one but more of a purging of the playbook to better the team.

“Sometimes things are good, but if you are not able to execute it, you’ve got to throw it out,” Embry said. “That’s kind of what we’ve been trying to do. Just try to get off on the right track early in the game. I think we’re better. I think we’re going to get better week by week. You’ve got two choices when you suffer a defeat like that. You can either bow up or bow out. I think we’re bowing up.”

Water Valley has three more games, including Pontotoc, before it begins their region portion of the schedule. With high school football set up the way it is and the non-region games not having a bearing on postseason standing, it’s the experience that a team takes away which matters most.

“We’re playing great competition,” Embry said. “If you look at the games we’ve lost, Eupora and Calhoun City could easily be playing to represent the north half in (Class) 2A. That competition and Pontotoc this week, a bigger school is going to bring more problems to us as far as depth. … We’re playing a high level of competition, and that’s a good thing as long as you don’t get beat down too much.”

Preparing for balance
Pontotoc comes into Friday’s game looking to rebound from a loss of its own, falling 27-24 at New Albany. The Warriors do not have numbers that jump out on the stat sheet in the early going of the season, but they do offer a balanced attack on offense.

Junior quarterback Jacob Carter leads the Pontotoc offense. Carter has completed 30 of 69 passes for 418 yards and has thrown four touchdowns to his three interceptions in three games. One of his favorite targets is junior wide receiver Jerrick Ray, who has eight catches for 121 yards and two touchdowns. Fellow receiver Lane McGregor also has eight receptions for 158 yards and two scores.

Complementing the Warriors’ passing game is a steady dose of the run game from sophomore running back Austin Morphis and freshman Gabe Harmon. The two have combined for 370 yards on the ground on 49 carries. Each has one rushing touchdown.

“Coach (Jeff) Carter does a good job. They have a good scheme on both sides of the ball,” Embry said. “They are real multiple on defense. Throw a lot of different looks at you. Offensively they throw the ball and run the ball easily. They do a good job in their screen game. It definitely will be a challenge, one that we are looking forward to.”

Senior quarterback and defensive back Kirkland Horton returned to practice this week for Water Valley but is still taking it on a day-to-day basis, according to Embry.

“We don’t want to throw him back out there until he is ready,” Embry said. “Whenever he’s ready, he’ll be going.”