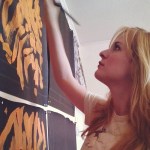 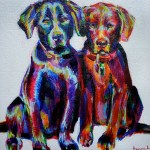 The L-O-U community’s support and appreciation of the arts has planted one painter’s roots right here in Oxford.

Hannah McCormick, a native of Starkville, attended the Savannah College of Art & Design before moving to Oxford and taking classes at the University of Mississippi. McCormick felt welcomed by the Oxford community, and said she hasn’t felt a need to leave since she arrived at Ole Miss.

“I have been out of school for a few years now and I stayed in Oxford for this community,” McCormick said. “Oxford is really welcoming to people who are artists and I feel really supported. I love it here — it’s a great town to base operations out of.”

While much of McCormick’s work involves portraits, she classifies herself as a figural artist who incorporates different mediums and mixed media. Besides painting, McCormick also creates illustrations and drawings and has been a part of two Oxford art movements of note — the Girls Art Show and Pet Portraits.

The Girls Art Show is an artist collective that was created when McCormick and Claire Whitehurst, another local artist, wanted to sell some of their old artwork. What started as a small art sale turned into a show that gave multiple local artists an outlet to feature their work in what could be described as an impressionist environment.

“We had a lot of old stuff that we wanted to sell,” McCormick said. “We were going to have this really basic art sale at home and we were going to invite people and have a barbeque. Then, two of our other friends asked if they could get in on it, too, and we were happy to oblige.

“The idea of what the Girls Art Show is is (showcasing) young female artists in the community that aren’t necessarily in the upper echelon of Oxford art society,” she continued. “We were trying to find a platform for us and a place for our friends and friends of our friends to see our art in a real, tangible way. We would have everyone come together on the salon of impressionism, when everyone would go to someone’s home where art would be hung everywhere and it would be really intimate, and, hopefully, not pretentious, and welcoming, warm and cozy, and you can stay, have a drink and hang out.”

The Girls Art Show was at Whitehurst’s home last year, and featured live music, a keg and a good time for all.

“It’s not wild by any stretch of the imagination, but we want it to feel warm and we want (attendees) to feel like they can be art collectors and patrons,” McCormick said. “A lot of the art world is kind of closeted — its very clinical and cold, so we were trying to put ourselves out there and have people come and visit with us.”

While McCormick hopes to have the Girls Art Show again, a date has not yet been set for the event.

McCormick, who self-identifies as an animal lover, started painting pet portraits when she gave her mom a picture of her pug as a gift.

“People seem to want portraits of their pets more than the humans in their lives now, which is an interesting trend that hasn’t gone away,” McCormick said. “I started doing it maybe about five years ago as a gift for my mother,” she said. “I did rainbow colors and other people saw it and they loved it. So, I started doing it as commission.”

McCormick focuses on the color in her work and believes the bright and fun hues found in the pet portraits may be a reason people are drawn to her art.

“I think people are self-conscious about portraiture, but they don’t worry very much about pets,” she said. “Everyone can connect with a dog or a coat on this crazy level, so I’m happy to be a part of that, and I try to have fun with the pet portraits.”

McCormick began her professional art career at 15 when she was first commissioned to do a paid piece of artwork for Josey Creek Baptist Church in Starkville. Many more commissions and portraits later, McCormick is now featured in the Fischer Gallery in Jackson and has a home studio where she paints and teaches her craft.