Get lost in art on the Yokna Sculpture Trail 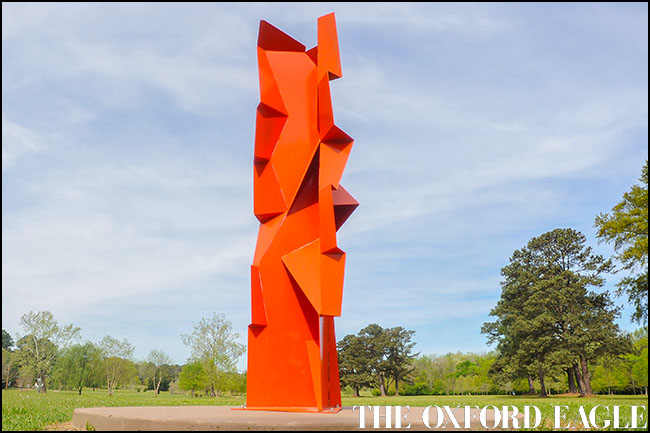 In Oxford, you can incorporate viewing modern art with your daily exercise routine.

“You can tour from downtown to Lamar Park,” said Wayne Andrews, executive director of the arts council. “It makes a nice loop. It starts in front of the Powerhouse on University Avenue.”

The trail continues up University Avenue to the University Museum. It winds in front of Meek Hall on the University of Mississippi campus. And Andrews said the trail extends to College Hill and Lamar Park.

“It’s three different parts of the city doing one activity,” he said. “That’s one of the unique things about it.”

Andrews said the project was a partnership with the arts council, the university arts department, area artists and other community members.

“Everyone was kind of working on this idea for several years, and it all came together where we were able to get some funding, the city was able to have some park space, and the art department came in with support,” he said. “One of the Leadership Lafayette classes came in and held funds to kick it off.”

Andrews said the sculptures will rotate each year.

You can learn more about the trail and artists who have contributed to it online at www.yoknasculpturetrail.com.

Billy Lamb, superintendent of building and grounds, is in charge of Pat Lamar Park.

He said the park was a project when Mayor Pat Lamar was in office. The seven-acre Lake Patsy on the grounds is also named after Lamar.

The lake welcomes fishers 15 or younger. Saturday, they held a fishing rodeo.

The 67-acre park is maintained by two full-time employees and one part-time employee. Lamb’s crew is led by supervisor Whitney Blanchard.

Lamb said it takes four days to mow the grounds.

“By the time we get through mowing and weed-eating, we have to start right back over again,” he said. “This year, has been a different year. The grass has just grown so much, it’s hard to keep up. It’s a full-time job just to mow the grass.”

Lamb said there aren’t a lot of big events held at Lamar Park, just a few birthday parties. He said it’s a great place to relax and toss Frisbees, although most people who come to the park run and walk on the trails.