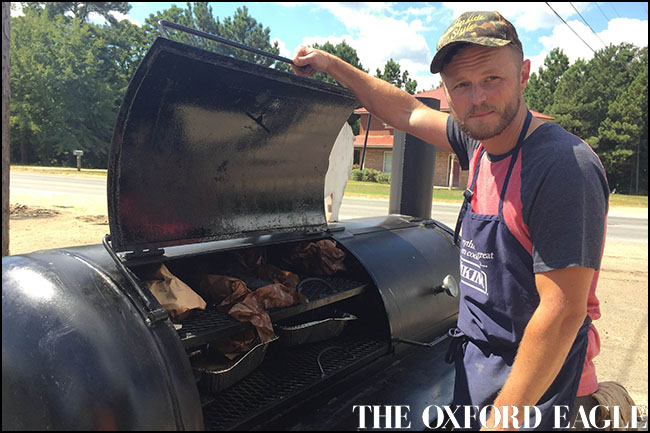 Tupelo native Brad Hayden, 37, teaches during the week and cooks on Saturdays.

For the last few weeks, he’s been operating his BBQ Smokeshop & Cookout Catering in front of the Farmer’s Market store at 274 County Road 101.

Hayden moved to Oxford in 1996 to attend the University of Mississippi, where he studied English and history.

“I worked in restaurants all during school to support myself,” he said, “and when I graduated, I thought I would make a career in food and beverage.”

Hayden worked in the food and beverage industry several years before his wife became pregnant.

“I decided that late hours, no benefits and low pay were not in the cards for a family,” he said.

He returned to the university and became certified to teach through the alternate route teaching program. He’s been teaching for 12 years.

“This is my weekend business,” he said. “On the weekends, I fire it up. I sell barbecue on Saturdays.”

This is the fifth week Hayden has sold barbecue at the Farmer’s Market.

“This is a new venture for me, but it’s been going really well,” he said.

Hayden said he’s been an enthusiastic barbecue cooker for the past decade, cooking mainly for family and friends.

The business fits in well with his school schedule.

“I think it’s a nice way for people to be able to provide a really quality product without a really enormous capital investment,” he said.

The business is also a smoke shop and they do cookout catering.