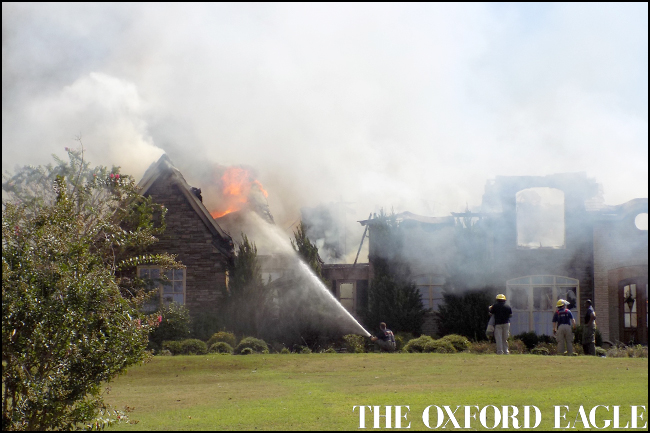 For drivers traveling down Highway 6 West on Wednesday morning, smoke blooms bellowing into the sky were hard to miss.

A house fire at 502 Canter Cove in the Steeplechase subdivision gutted a home into the afternoon Wednesday, keeping county firefighters on the scene for more than six hours.

The home is a secondary residence of Stanley Coleman of Madison. Coleman was at the scene of the fire, which is still under investigation.

Wes Anderson, a Lafayette County fireman who was in charge of the scene, said lack of water flow and manpower contributed to his team being at the fire for such a long time. The county fire department, which relies heavily on volunteers, called Panola County for backup to suppress the fire.

All water used to fight Wednesday’s fire, called in at 10:32 a.m., was hauled to the scene on trucks, also contributing to the firemen’s long hours.

“If your water flow is limited, it limits your capacity to suppress the fire,” Anderson said.

While Lafayette County Fire Coordinator Jerry Johnson classified the incident as a “total loss,” he was glad the fire caused no major injuries.

“We’re just happy that no one was injured other than some of our firefighters with some light burns,” Johnson said. “Thank goodness the homeowners were out and nobody was injured. Our major concern is protecting lives — that’s our primary mission, and then protecting property is our second.”

The Steeplechase house fire wasn’t the only fire in the county Wednesday.

“When this call toned out, the two paid staff members were en route to another call,” Anderson said. “They had to abandon that call (to get to Steeplechase), and in the middle of this fire, we had another one in the county for a fire alarm. We had three calls and very few people.”

Johnson said lack of volunteers in Lafayette County and paid staff members contributed to the need for additional help.

“The daytime and sometimes nights and weekends are pretty light because so many of our volunteers are working at least one job, and sometimes two, to make ends meet,” Johnson said. “We’ve seen our volunteers go down the last two years. Volunteerism is not as much as it used to be.”

Johnson said because of the limited manpower it was mostly the same crew working the fire for hours.

“We were out there around six hours with just the same people,” Johnson said. “At the end of the time they were totally spent. We finally got some Gatorade to try to boost them back up, but six hours out on a fire scene takes its toll on firefighters. The fatigue gets them and sometimes it becomes unsafe.”

The department recently submitted a proposal to the County Supervisors to add paid positions to the staff, but it was not funded.

“We believe as a fire department that is one of the most important aspects of continuing to protect Lafayette County,” Johnson said. “We want to protect the county at the highest level, and (adding paid positions) is one way that we can increase the fire protection and the safety of our citizens.

“We had hoped that the supervisors would consider that,” he continued. “We felt like it was an extremely good proposal and we see that as the future.”