MORE OF THE SAME: Commodores expect ‘playoff’ atmosphere at Louisville 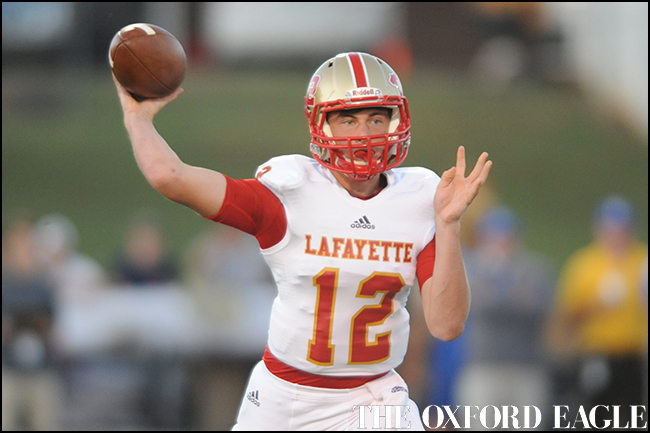 Suffering their first loss of the season last Friday in a 31—21 game against crosstown rival Oxford had Lafayette feeling down, but that did not last long. The Commodores could not allow themselves to dwell too much on the game as they have another tough challenge Friday night in the form of Louisville (93.7 FM).

“We’ve had good morale,” Lafayette coach Eric Robertson said. “The kids have responded the way we wanted them to after a loss. We know we don’t have any time to feel sorry for ourselves. We have to come ready to play at Louisville. We know it’s going to be tough.”

Lafayette (3-1), ranked as the No. 1 team in Class 4A by the Associated Press, may have lost the battle on the scoreboard, but after reviewing film, Robertson found a lot of positives to take away heading into this week.

“We outgained (Oxford) by 100 yards in total offense,” Robertson said. “I thought we moved the ball on them up and down the field. We just didn’t put points on the board, and we’ve got to learn how to finish.”

The Commodores have their work cut out for them as they take on a Louisville team (3-1) that has been a household name in the world of Mississippi high school football. The Wildcats dominated Class 3A, having won their most recent state championship in 2013. They moved up a class to 4A this year, but the bigger pond has not affected the Wildcats four games into the season.

“They look like a typical Louisville team,” Robertson said. “Very athletic. They’re fast and some really good-looking kids on film. They have a lot of speed at all four receiver spots. … A lot of tradition. I think they’ve won eight or nine state championships. We know we’re going to have our hands full. It’s a tough place to play down in Louisville.”

Like Lafayette, the Wildcats’ only loss is against a 5A opponent. They lost to West Point 46-7 back on Aug. 28 and have wins against New Hope, Kemper County and a blowout win over Philadelphia last week.

Louisville has a balanced offensive attack but can become pass-heavy if the game calls for it, according to Robertson’s observations from game film. Senior quarterback Brody Burchfield leads the Wildcat air attack with senior running back Keon Coleman handling things on the ground.

Defensively Louisville is known for attacking the quarterback early and often, creating pressure and disrupting the passing game. For Lafayette signal caller Will Ard, who through two interceptions last week, the goal is to keep his head on a swivel and use running back Tyrell Price as a counter to keep the Wildcat defense as honest as possible.

Playoffs in September
Last week’s game against Oxford featured an atmosphere that rivaled a playoff game in mid-November. Robertson expects more of the same this week with two teams that could very well see each other again in the playoffs two months from now.

“We expect the same thing this Friday at Louisville,” Robertson said. “It really is. It’s a playoff game. We could see them down the road. We’ve seen Louisville several years in the playoffs and I know they are going to be in the playoffs this year.”