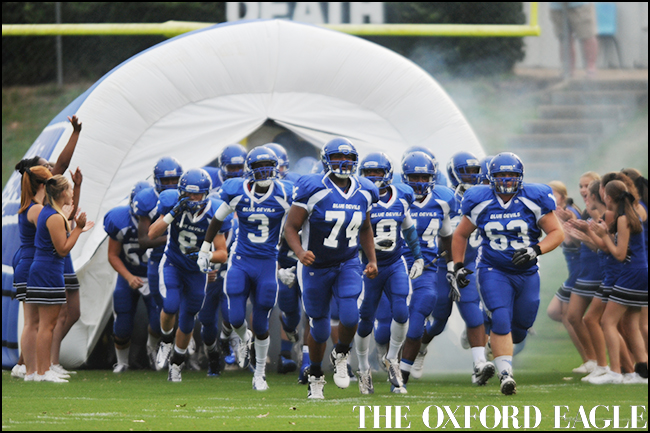 “It’s about our mentality right now,” Embry said. “Can you be focused, can you be mentally tough and can you continue to work and get better? Don’t look at the scoreboard, look for improvement.”

A youthful Blue Devil team showed the most signs of that improvement it has all season, Embry said, in last week’s one-score loss to Pontotoc. The Blue Devils (1-3) will try to snap their first losing streak of the season Friday when they welcome Senatobia to Bobby Clark Field.

The Class 4A Warriors were the first opponent Water Valley played in a higher classification, and Senatobia, also a 4A foe, will be the second. It’s highlighted a strong non-region schedule for the Blue Devils, who have also lost to Eupora and Calhoun City, the fourth- and fifth-ranked teams in the 2A classification, respectively.

That’s the way Embry wants it before Region 2-3A play arrives for his team Oct. 2 at Charleston.

“We probably played our best game as far as executing and stuff Friday night. Didn’t win, but we saw what we did wrong,” Embry said. “And we’ve played some decent games. If I had scheduled some different opponents, we might be undefeated right now. But we wouldn’t be any different than we are.

“Competition makes you better. I told (our players) we’ve been 11-1 before and really, really good and didn’t make it to state. Obviously we’d like to win every game, but that’s not the reality of the first four games. We’ve got to keep the big picture in mind.”

Speed kills
Water Valley has played Senatobia (3-1) each of the last two years, splitting those games, but a specific challenge the Blue Devils will have to deal with against this year’s version of the Warriors is speed, Embry said. The Warriors have it all over the field.

“They’re really fast,” Embry said. “They’re disciplined on defense. You look for them to make a mistake, and it’s hard to find one.”

The Warriors’ spread offense also has a different look to it behind third-year quarterback Cooper Stevens, who’s brought more balance to what’s been a run-heavy attack in the past, Embry said. The Warriors still prefer to keep it on the ground — K.D. Chapman (276 yards), Deanta Sipp (218) and Stevens (53) have combined for 127 carries — but Stevens, a junior, has thrown it 79 times, completing 46 of them for 573 yards and eight scores.

“They’re getting more balanced. I know their quarterback is getting older,” Embry said. “You can tell his progression with his decision-making and just getting more mature. He throws the ball well.”
Water Valley got a key piece back last week in senior safety and specialty quarterback Kirkland Horton, who missed the previous two games after going down with an injury in the season opener.

Horton played exclusively on defense against Pontotoc and will stay there for now as he works his way back to full health.

“We just decided as a staff that if we’ve got Kirkland for a set numbers of plays without taking a chance on him getting really tired and reinjuring himself, it’s going to be on defense, which is his strength,” Embry said.

That leaves the full-time quarterbacking duties to sophomore Ty Varner, who’s earning more trust from his coach after a three-interception showing in the opening loss to Eupora. Varner hasn’t thrown a pick since and threw for 230 yards and a touchdown last week.

“I’m really proud of where (Varner) is,” Embry said. “If he continues to do what he’s doing, he’s got a chance to be a good one. We’ll see.”

Offense fizzles out as Blue Devils fall to Pontotoc