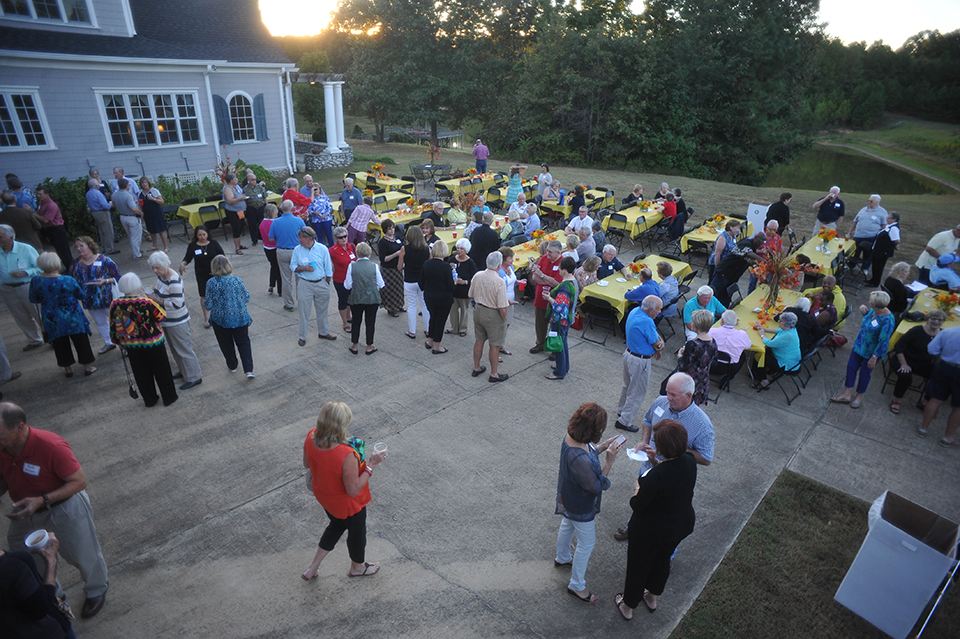 The Newcomers Club meets near Oxford, Miss. on Tuesday, September 22, 2015.

With new residents arriving in Oxford every week, the Oxford Newcomers Club is gaining members and helping people adjust to new surroundings.

Eddie Clinton and his wife, Carol, moved to Oxford in December 2012 from Orlando. He was an Ole Miss fan who had always wanted to live in Rebel country. The couple also has three grandchildren who live in Oxford and one in nearby Senatobia.

“There is something to do every day here,” Eddie Clinton said. “This morning, we played bingo at Chick-fil-A. Now, my wife has gone to exercise. Then she goes to play Mahjong. We also belong to The Orchard, and we have a community group that meets every Wednesday at one of our houses, where we do a little Bible study.”

The Clintons are also members of the Oxford Newcomers Club. Founded in 1999, the club welcomes new community members and provides information about what Oxford has to offer. New members are welcome to join any time.

It features a number of activity groups that typically meet once a month to play games, read books, have cocktails and dine, watch movies, do needlework and attend athletic gatherings.

Members receive a monthly newsletter plus notices of special events. While most members are retirees, any newcomer to Oxford and Lafayette County is invited to join.

He led several championship teams before he was asked to oversee AAU girls basketball in 1996 at the newly constructed, multimillion-dollar AAU facilities in Lake Buena Vista, Florida. His wife, Carol Clinton, taught school for 48 years in DeSoto County, Memphis and Florida.

Eddie Clinton, who joined the group in 2013, said another benefit to the club is the fact it is a part of the Chamber of Commerce.

“It’s really been a godsend for us,” he said. “On Mondays and Thursdays, I go to breakfast at the Beacon. Last night, we had our kickoff party. There were about 160 people. It was good fellowship and good music.”

He said the club also will have Thanksgiving and Christmas parties.

“There are so many things to do,” he said. “Take advantage of all that Oxford has. I had to do a selling job to get my wife to come up here. She won’t leave now. She has friends like she’s never had before.”

Reba Greer leads educational events for the group. She grew up in Mississippi, left in 1963, and lived in several sates before settling in Virginia. She worked as a teacher and as a school administrator. Her husband, Lance Greer, graduated from Mississippi State University with a degree in mechanical engineering. The couple moved to Oxford in 2011 after living in Virginia for 40 years.

“Everybody we met said, ‘You need to get in Newcomers,’ and we didn’t for a year or so,” she said.

Greer said the club’s next hour-long educational program will be at 10 a.m. Oct. 13 at the Chamber of Commerce. Mayor Pat Patterson will talk about what city leaders do. Those interested in attending should email the club or Chamber of Commerce to reserve a spot.

“The Newcomers Club is quite a diverse group,” Reba Greer said. “There are couples, people who are single, people who have lost spouses. They are exploring aspects of the Oxford community.