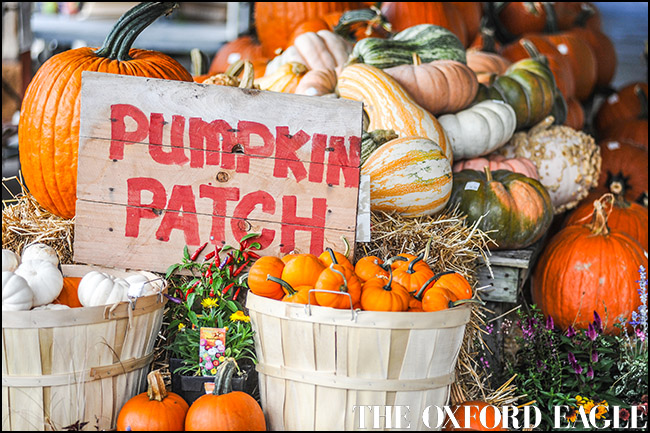 Whether you are buying one to make a scary jack-o-lantern or purchasing one to produce the perfect pumpkin pie, it won’t be long until you see pumpkins popping up all over Oxford.

One of Oxford’s most popular places to purchase pumpkins is at Saint Peter’s Episcopal Church at 113 S. 9th St.

“We usually get a tractor-trailer load of pumpkins, and the church gets together and unloads them,” she said. “We have everything from the mini-pumpkins to the great big pumpkins.”

McCord said the pumpkins are purchased from a charity that benefits a Native American reservation in Arizona.

The church is a popular site for school groups, who come to take pictures and purchase pumpkins.

“We schedule nursery schools and day cares, and even some school groups from Oxford and Bramlett send little kids to pick out pumpkins,” McCord said.

McCord said the church has sold pumpkins for about 20 years.

“It’s always been a charity event,” she said. “It’s the fundraiser for our youth. It helps a lot of people. We always put it in a reserve account, and they spend it as needed for the activities they are doing.”

Anyone can come by the church to purchase a pumpkin or take pictures with pumpkins.

“We put out a sign with the hours on it, and everyone can come out at any time and pick out pumpkins,” said McCord.

There is no fee for having your picture made with the pumpkins.

The Barn Trading Company, at 2657 West Oxford Loop in Oxford, will also be selling pumpkins.

Owner Brittany Barnes said a number of people come to the store to pick out a pumpkin.

“We don’t do just the traditional orange pumpkins,” she said. “We do the novelty pumpkins. They are unique pumpkins because they are of a different style. They are not just orange colors. Some of them are white, pink. We also do the decorative gourds.”

Barnes said their “pumpkin patch” is set up inside the store.

“We have them lined up on tables, and we have a wooden sign that says ‘Welcome to the pumpkin patch,’” she said. “We have them organized in different sizes.”

Oxford and Lafayette County residents searching for the perfect pumpkin can also keep watch at area farmers markets this fall.