GETTING CLOSER: ‘Dores sweep Trojans, move in on region title 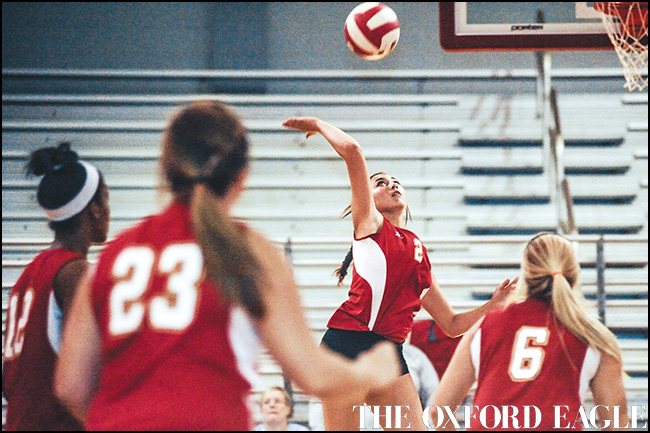 Whatever was missing from the Lafayette High volleyball team the first two months of the season has been found at the perfect time.

It was another in what has been a string of dominant performances for Lafayette (17-12, 6-1 4-4A/5A) as the Commodores handled New Hope with ease. The Trojans never led, and the only time they were tied with Lafayette in the first two sets was when the score was 5-5 in the opening frame.

New Hope (6-13, 2-5) made things slightly more interesting in the third set as the Trojans took an early 4-2 lead, their second lead of the match. It was short-lived as Lafayette rattled off a 8-3 run for a 10-7 lead before pulling away with a 15-3 run to close out the match.

The Commodores had the look of a team that regained their confidence, making save after save to keep a rally going that they may not have made a couple weeks ago before the wins began piling up.

“What we really found was each other,” Jordan said. “We started playing together again. We went through a stretch (during the season) where I don’t want to say we had internal problems, we just weren’t clicking. The chemistry was bad off, and we had one good night and it kind of set us back in motion.”

In the middle of this surge of success for the Commodores was a 5-1 performance at the Clinton Invitational last Saturday. The win over Caledonia, which is also 6-1 in the region, evened their season record against each other at one win apiece. Lafayette earned the tiebreaker over the Confederates and with a win over Amory on Monday can claim the region title.

“We’re in the driver’s seat, it’s up to us,” Jordan said. “Anything can happen in high school athletics of course, but I feel good about our chances and potentially hosting a playoff game.”

Grinding ‘Dores
Much like it began the season, Lafayette closes out its regular season slate possibly playing 12 matches over the next two weeks.

Six matches are scheduled to happen with a maximum of six more potentially taking place this Saturday at the Volley For The Cure Tournament being hosted by Lafayette and Oxford to benefit the Susan G. Komen foundation.

With a No. 1 seed in sight and momentum heading into the playoffs, Jordan scheduled the closing weeks of the season this way intentionally.

“I didn’t want to have a tremendous amount of practices going into the playoffs,” Jordan said. “I wanted to actually have some games. When you’ve got a lot of seniors who’ve experienced what we have and the growing that we had last year, we really needed games more than we needed practices. I hope that decision is good. We’ll find out.”