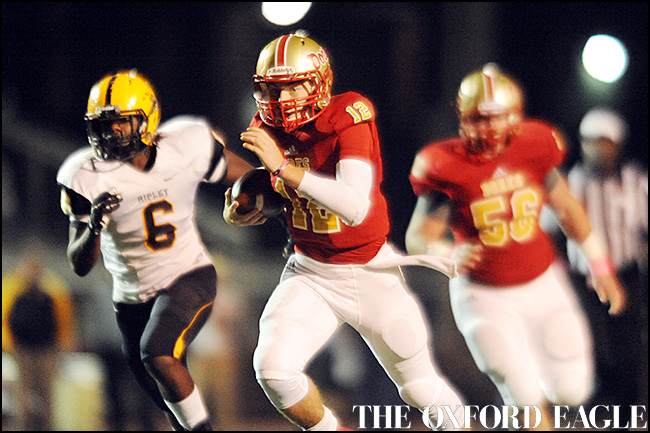 Lafayette High's Will Ard (16) runs 25 yards for a touchdown in the first quarter against Ripley at William L. Buford Stadium in Oxford, Miss. on Friday, October 2, 2015.

In a game that was dominated by the rushing attack, Lafayette defeated Ripley in a 45-14 blowout in both teams’ Region 2-4A opener Friday at William L. Buford Stadium.

The Commodores (6-1, 1-0 Region 2-4A) managed to produce 318 total yards with 216 of those yards coming from running back Tyrell Price. Price also finished with four touchdowns while only playing one snap in the second half, and that snap turned out to be a 47-yard touchdown run, putting the Commodores’ lead at 45-6 early in the second half.

Price has rushed for 1,235 yards and 17 touchdowns in seven games this season.

“Price has done this all year for us,” Lafayette coach Eric Robertson said. “250 yards vs. Grenada, over 200 yards tonight. Some of these colleges need to get on him. Price has a lot of great blocking in front of him, which helps him out, but he also gets a lot on his own.”

Much of the game focused on the first half with neither team recording more than 100 yards of offense in the second half. The game was nearly over before it started, allowing plenty of reserve players to get valuable game experience.

One of those players, Jamarcus Quarles, was a significant factor to the Commodores’ offense and was the driving force behind the offense after Price was removed from the game. Quarles only finished with 56 yards on 15 carries but progressively became more comfortable with the offensive line’s blocking schemes.

Price is a giant part of the offense, and if something were to happen to Price, Quarles has shown he’s able to fill his spot.

Breaking away from Price and the running game, the Commodore passing attack failed to see much action with the starting and backup quarterbacks combining for two completed passes equaling 10 yards. Many of the incompletions against Ripley (2-4, 0-1) could be credited to the unsure hands of some Commodore receivers.

The Commodores had the game virtually won before the teams went to the locker rooms for halftime. Ripley quarterback Tucker Childress fought possession after possession to keep his team alive, but the Lafayette defense shut down the Tigers’ offense on almost every drive.

Quin Jones deserved recognition for his defensive performance. Jones returned an interception for a touchdown during the Commodores’ 31-point second quarter. Lafayette scored four touchdowns, three coming from Price and one from Jones, in a two-minute span. The Commodores looked comfortable the entire game, and the win was important before they face one of their toughest challenges this season.

The Commodores will travel to Tunica this Friday to play the undefeated Rosa Fort Lions (6-0).