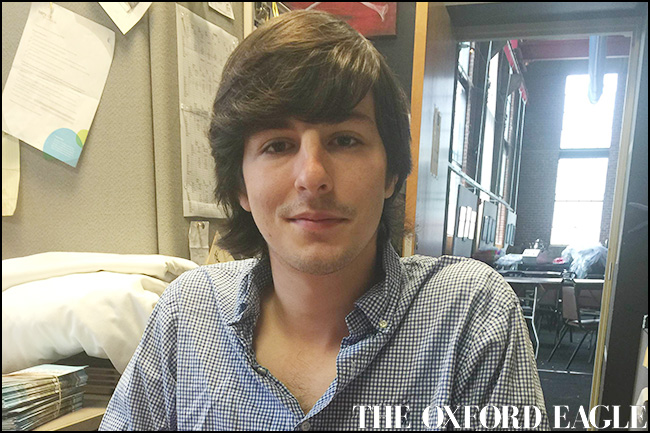 Morgan Andreiev grew up in North Carolina near the river but after one visit he knew he wanted to attend the University of Mississippi and stick around awhile.

“My earliest memories were always centered around the river, because we live on a riverfront town,” the 22-year-old said. “We actually have a dock in the backyard and a river back there, so I’ve always been on the water in some shape or form. Some of my earliest memories involve either going out in the boat, swimming in the river or swimming in a pool.”

Andreiev attended high school at a boarding school in Tennessee, where physics was his favorite subject.

“I just enjoyed it,” he said, “but I was never particularly good at it. I’ve never been particularly great at math. I also enjoyed taking French and learning foreign languages.”

Today, Andreiev is a part-time employee with the Yoknapatawpha Arts Council who plans to spend a few years teaching English abroad.

He said he originally thought about attending college in North Carolina, but changed his mind after a trip to Oxford.

He knew he wanted to attend school in the South, so he began looking at other SEC colleges.

“We started in Georgia and worked our way over,” he said. “We came to Ole Miss on a whim. We were just in the area and thought we might as well go look at it. We stepped on campus, and I just fell in love with it.”

Andreiev said pretty girls on campus were also a factor in his decision.

“When I stepped on campus, I got that vibe I wanted from the college campus,” he said. “Whenever we looked at Mississippi State, I thought the campus matched the city very well. It is a very stark area.

“When I was on the Mississippi State campus, I didn’t feel like I was there because it’s so spread out. Here at Ole Miss, it’s consolidated in one spot. When you’re on campus, you know you’re there.”

“I realized that was a little too broad for me,” he said. “I really wanted something a little more centered on the people aspect.”

After interning last summer at UM professor Robin Street’s public relations class, he was offered a part-time position with YAC when the internship ended.

“I do a little bit of everything,” he said. “For the internship, I helped out with public relations. I do what they want me to do, whether it’s event setup and management, writing press releases or social media networking.”

Andreiev said his future plans include teaching English in Southeast Asia for a year or two.

“I’m getting old,” he said. “I love to travel. I love to meet new cultures, meet new people and learn new stuff. I want to take advantage of being young while I can, travel and get a little work experience under my belt.”