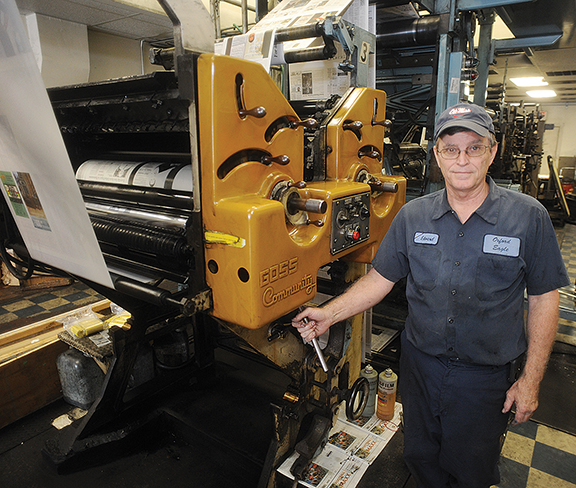 Eddie Lance has been running the printing press at the EAGLE for the last 22 years.

Sometimes, in movies about newspapers, an anxiety-ridden editor will run into a room with massive mechanical machines and shout to the crew “Stop the presses!”

“We were printing, and (9-11) happened on the news,” said Edward Lance, head pressman at The Oxford Eagle. “We threw away 3,000 papers, and changed the front page.”

Lance, who has been in the printing industry for 40 years, has worked 23 years at The Oxford Eagle, manning the paper’s printing press in an industry that has rapidly changed over the last few years.

“It’s changed from doing lead printing and letter press, up to now we do course off-set,” said Lance,who has a degree in computer science from Delta State University where he studied to be a computer analyst.

He began his career managing retail stores, but grew tired of moving around. A friend offered him a job in the printing business, and he’s been doing it since then in different forms.

When Lance first began his career as a printer specializing in business cards and letterhead, he did printing the old fashioned way.

“There was a drawer, and it was set like typewriters have their type keys,” he said, explaining the process. “You can memorize it and grab your letters really quickly. There are little pieces of lead. Cubes. Picas. Half-picas. Points. And you can separate your words. That’s how you get your words a distance apart . . If you misspell one of those, you have to reset the whole machine and re-cut it.”

Now, computers save a lot of time. The paper moves through it from the reporters, editors and designers to Lance.

“They make the pages,” he said. “They send them over to my computer.”

A “negative” of the pages is sent into a processor.

The Oxford Eagle printing press is one of those things you’ll find Only in Oxford.

After getting everything set up, it takes about 45 minutes to print 6,000 papers every day.