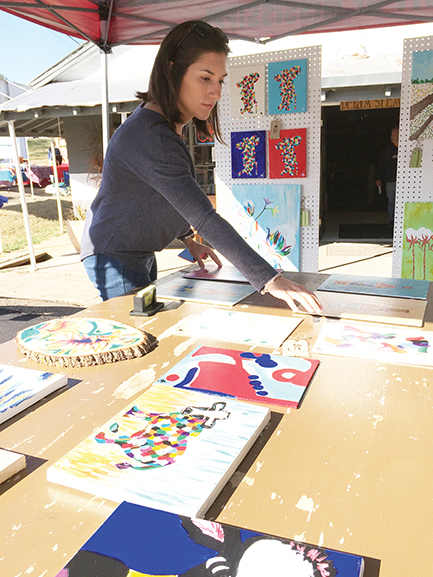 Oxford native Ann Crabtree, above, was displaying her artwork for the first time Saturday at the annual Abbeville Autumnfest.

She was one of a small group of vendors at the event on the cool, sunny day, selling handmade items.

“I make jewelry out of glass beads, stones and crystals,” she said. “My best friend does the jars with the Ole Miss and Colonel Reb.”

There were several jars on display in Brown’s booth with the retired colonel’s motif. He was even found painted on plastic barrels that could be used as trash cans or clothes hampers.

“It’s been a little slow this morning, probably because it’s early,” said Brown.

Oxford resident Lashaunda Sisk, 42, and her husband, Greg Sisk, were organizing their craft booth just down the street from Brown.

“We have a little side business called Something Old, Something New,” Lashaunda Sisk said. “We do pallet furniture, and we specialize in monograms. I like finding really neat ideas and turn nothing into something.”

Sisk said she and her husband create pallet headboards, tables, entertainment centers, farm tables, benches and pet beds. Benches have been some of their best sellers.

Sisk, who is a pediatric nurse, said she and her husband started the side business after she asked him to make her a headboard from pallets.

“We started selling them,” she said. “Needless to say, I don’t have my headboard yet. I come up with ideas, and he gets in there, cuts it and does what he needs to do.”

The Sisks arrived at the event about 7 a.m. Saturday morning, and were pleased that they had sold two or three items in a few hours.

“We were in Tupelo last weekend,” she said. “Some of our items will be in a store on Main Street there. This is our second show.”

This was the first art show for Oxford native Ann Crabtree, 23, who brought Southern Colors art to the event. Her sister and brother-in-law own Delta Steak Company in Abbeville, and they invited her to the festival.

“I’m trying to get my art out there,” said the Atlanta resident, who only recently began painting. “My best bet was to start back in my hometown.”

Crabtree, who graduated from Oxford High School and studied marketing at the University of Mississippi, said all of her acrylic art pieces have a Southern theme.

“I don’t want normal colors on everything,” she said. “I want the bright colors to make it different.”

This was her first time selling art at a festival.

I’ve walked around and looked at everything,” she said. “It’s nice. I love it.”

Water Valley resident Taylor Eggleston, 20, also sold art at the festival. Some of her creative items included wine bottles with Christmas lights in them and painted windows, both with the Colonel Reb motif. She also paintes on burlap.

“I like to reuse things and not waste them,” said Eggleston, a University of Mississippi student studying psychology. “Also, our family is known to be creative. I used to decorate my dorm room at Ole Miss, and all my friends came in, and they were like, ‘Oh my gosh. I wish I had your room.’

“That automatically clicked in my head, and I was like maybe if I sold some of this stuff, maybe I could make something. And I have been selling a lot of bottles and a lot of frames.”

She got even more response after putting some of her work on Facebook.

“The lady who runs this festival e-mailed me, and she was like, ‘I want you to be here.’ It’s cold. Other than that, I really like it. It’s really home.”