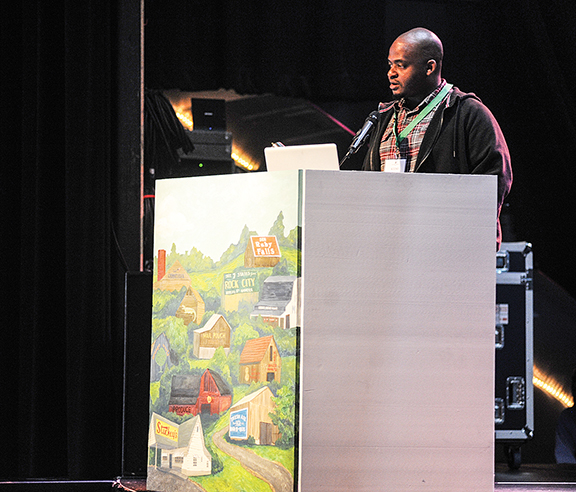 Kiese Laymon speaks during the Southern Foodways Symposium at the Lyric, in Oxford, Miss. on Friday, October 16, 2015.

Oxford’s annual Southern Foodways Symposium kicked off this week, bringing in a variety of speakers and uniting people through the love of food, family and pop culture.

Catarina Passidomo, a new Foodways professor with the Southern Studies Sociology and Anthropology program at the University of Mississippi, welcomed the audience to the 18th event.

“Like all of you, I see food as a vehicle to a lot of other conversations,” she said. “Food is like a well-traveled Airstream trailer covered in stickers proclaiming where it’s been. Food takes you places. It invites people to come and look and sit awhile, ride along. It signals to people where you’re coming from, where you’re headed, what you care about.

“You cruise along in your food Airstream with friends and family, and sometimes strangers, but the point is that trailer and you are moving, constantly picking up new people and stories.”

Passidomo said teaching about food has been fun and rewarding.

“Students of Foodways are eager, curious and smart, but they’re also often sold a false bill of goods. . . They learn it’s not about the food at all. It’s about what food can tell us about what people care about, what they fear, how things change, or why they stay the same. Through deep engagement with scholarships, with a tremendous SFA oral history and film archives . . . students of Southern Foodways come to appreciate food as a legitimate and serious topic of scholarly inquiry.”

Passidomo said first-time attendees were drawn to the event because of the special theme this year of pop culture, in which they studied how the South is packaged and sold. One speaker, Kiese Laymon, received a standing ovation after reading an essay comparing his grandmother to hip-hop music.

Laymon, a Jackson native, who is an author, professor and the recipient of the 2015-2016 Grisham Writer in Residence Fellowship at the University of Mississippi, said his heart-wrenching essay explores the contrasting qualities of his stylish Mississippi grandmother who worked in a chicken plant compared with the validity of Southern hip-hop music as an art form.

Residents will have the opportunity to see if they agree when his work appears in Oxford American magazine next month.

“It’s a piece on how important black love has been to pop culture production,” he said. “Really, it’s just about love.”

Laymon attended Millsaps College and Jackson State University before graduating from Oberlin College. He earned an MFA from Indiana University and is currently an associate professor of English at Vassar College.

He is the author of the novel “Long Division” and a collection of essays called “How to Slowly Kill Yourself and Others in America.” Laymon has written for numerous publications including Esquire, ESPN, Colorlines, NPR, Gawker, The Los Angeles Times and The Guardian.

He has three books in the works, including a United Kingdom edition of “How to Slowly Kill Yourself and Others in America.” “A Fat Black Memoir” will be released next spring, and the novel “And So On” will be released in spring 2017.

John T. Edge, director of the Southern Foodways Alliance, asked Laymon what it feels like to be at the University of Mississippi.

“It’s more than weird,” he said. “I was born and raised in Jackson, Mississippi, and . . . I got my first real whooping for wearing an Ole Miss jersey when I was 8 or 9 years old. My mother told me I shouldn’t wear it. I couldn’t wear that. I started to understand why. Ole Miss didn’t really exist as a place in my imagination where I would ever want to go and be, so coming back to Mississippi, but coming to the most foreign place from my home, has been strange.”

Laymon encouraged Oxonians to talk to one another, have workshops on issues facing the town and ways to take care of all residents.

Speakers and food tastings were lined up Thursday through today for sold-out crowds. Today’s events continued to blend pop culture and food and include coffee and sustenance from Corbin Evans, benediction by Edward Lee, “On White Trash Cooking,” a meditation by Price Walden and the Donkey Sauce Players; “The Masked Avenger Speaks” of Guy Fieri and other concerns; and “Pappy Meal,” a boxed cornucopia for the road curated by Drew Robinson.