Cycling clubs popular and continue to grow in Oxford 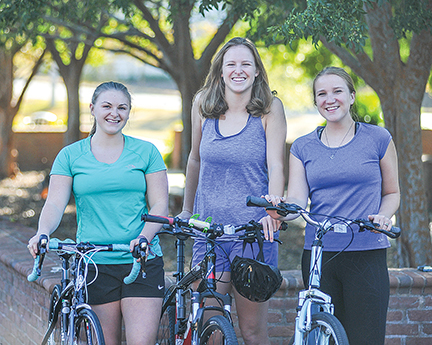 Sara Williston, from left, Sarah Meeks, and Grace Sullivan are members of a bike club, in Oxford, Miss. on Tuesday, October 20, 2015.

There are a lot of ways to live an active life in Oxford, and biking is one way to get a handle on things.

With at least five different biking groups, there are many opportunities to get moving.

Grace Sullivan, 20, is involved with both the Ole Miss Cycling Club and the Active Transportation Advisory Committee.

“The cycling club is different because it is an all-student group that is also student led,” she said. “Most of us are riding and training this semester with intentions to enter collegiate races in the spring, so there is a sense of excitement and anticipation, at least for me.”

Sullivan, a Madison, native and junior University of Mississippi student studying social work, journalism and political science, said the ATAC is a group of students and faculty who advocate ways to make Oxford and campus more bike-friendly. Sullivan calls the group a healthy outlet for communication and brainstorming.

“Most of us use bikes for different reasons, so we have helpful perspectives on the needs of the Oxford biking community,” said Sullivan, who joined the cycling team at the beginning of the semester to spend more time with friends on the team.

“Because of my interest in sustainability issues, I also wanted to start biking as an alternate means of transportation,” she said, “and I thought that being on the cycling team would be a good accountability system to help me build enough strength to bike as a commuter.”

Sullivan said she also joined the ATAC because of her passion for sustainability.

“Through my positions as an Office of Sustainability intern and the Associated Student Body’s director of campus sustainability, I heard about the formation of the new committee, and I knew that I wanted to be a part of it,” she said.

The cycling club is growing and includes both mountain and road cyclists. That means bikers usually ride in smaller groups instead of riding with the entire team.

“Every Tuesday afternoon, we have what we call Ladies Ride Tuesday, which is the official practice time of our ladies team,” she said. “Right now we are riding between 10 and 12 miles, depending on what we have time for.”

They typically begin on campus, but the route usually changes weekly. Sullivan said Molly Barr, College Hill, and Old Taylor Road are some of her favorite bike treks.

“I have gained so much more than I expected from joining this group,” she said. “I get to spend more time with my friends, which I had hoped for, but I have also built a new community with the other team members.”

Sullivan said she and other bikers have participated in philanthropy events like the AmTryke race on campus that provided a specialized bike to a disabled veteran and the Brian Dahl Memorial Birthday Ride that benefited the Christian Relief Fund.

“It’s amazing to me the ways we’ve been able to get involved with the community through cycling,” she said. “I have also gained accountability and support particularly from the rest of the ladies team. Athletic is not a word often used to describe me, but I have built both strength and confidence thanks to the Ole Miss Cycling Club.”

Flowood native Everett Gooch, 24, is a UM senior in the general studies program. He’s a member of the Oxford Cycling club.

Gooch said another public cycling group is the Ole Miss Cycling Club. It’s open to all students, faculty and staff that operates through campus recreation with a focus on racing.

“With that being said, we are a club before we are a team,” Gooch said. “Half of our members are avid road and mountain racers.”

The other half just enjoys riding with a group.

“When we are not racing, we make an effort to participate in cycling events that benefit the local community,” Gooch said.

He became involved with the Ole Miss Cycling Club when it was founded in spring 2014. Gooch said those who want to join should contact the campus recreation department or send a message through the club’s Facebook page.

Gooch said both clubs have a variety of rides.

The Oxford Cycling Club is operated through a public Google group. Members post rides and events inviting others to show up.

Gooch said the Ole Miss Cycling Club hosts a public, bi-weekly mountain bike race at the South Campus Rails-to-Trails on Thursdays at 5 p.m. For more information, check out the club’s Facebook page, the Oxford Cycling Google group, or Full Motion Running and Cycling on the Square.

Gooch said there is a sense of community among bikers in Oxford and Lafayette County.

“It doesn’t matter whether you’re a commuter or a racer, we’re all here for each other and the betterment of our streets and community,” he said. “The people I ride with become some of the closest friends I have. But mainly, biking with others is just more fun.”