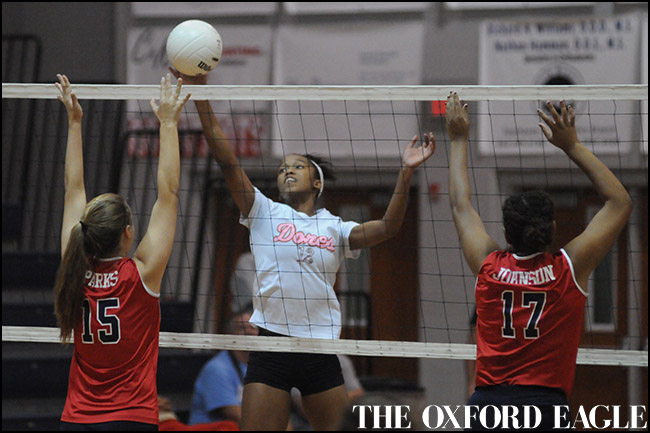 OLIVE BRANCH — There was no rallying this time.

Two days after erasing a one-set deficit to keep its season alive, an early hole against the defending state champion did Lafayette in Thursday. The Commodores’ season ended with a 3-0 (25-17, 25-12, 25-13) loss at Lewisburg in the second round of the MHSAA Class II playoffs.

Lafayette (24-15) went back and forth with the Patriots deep into the opening set, but Lewisburg’s powerful serves wore on the Commodores late. Lewisburg (24-13) ended the second set on a 12-3 run and quickly built a 13-point lead in the third to finish off Lafayette and advance in its pursuit of a second straight Class II title and a third state championship in five seasons.

Jordan liked his defense against Lewisburg’s attack, but the Commodores’ inability to handle the majority of Lewisburg’s well-hit serves rarely allowed them to get in it. Junior Orianna Shaw had a team-high five blocks while senior Kylie Glass collected four in the final match of her career, but Lafayette spent most of the night simply trying to return the ball against the brute strength the Patriots have become known for under head coach Allison Burchyett.

“Their serve was so good that we could never get a ball that we could attack,” Jordan said. “Everything we hit back was just defensive swings. Just playing the ball back, trying to get a rally going. They have good enough players that during a rally, they can end the point.

“They’re by far the best serving team we’ve seen, and it’s a tribute to their coach. That’s her deal. That’s Allison’s deal is to be great servers, and they are.”

Commodore pride
Jordan credited his four seniors — Glass, Emily Robinson, Shelbi Buford and Edi Kent — for helping the Commodores pull it together when the match started to snowball. Lewisburg stormed out to a 19-6 lead in the final set before Lafayette rattled off five straight points to briefly halt the inevitable.

Those seniors were thanked in the team huddle after the match by Jordan, who gave them most of the credit for continuing the success since he took over two seasons ago and setting the program up for even more in the future.

“I came into a program, and they’d already went to North Half,” Jordan said. “Everybody told me we were graduating so many that we wouldn’t be good, but I did not believe that because of these four seniors. I knew the kind of heart and kind of mettle they had, and they showed that tonight.”