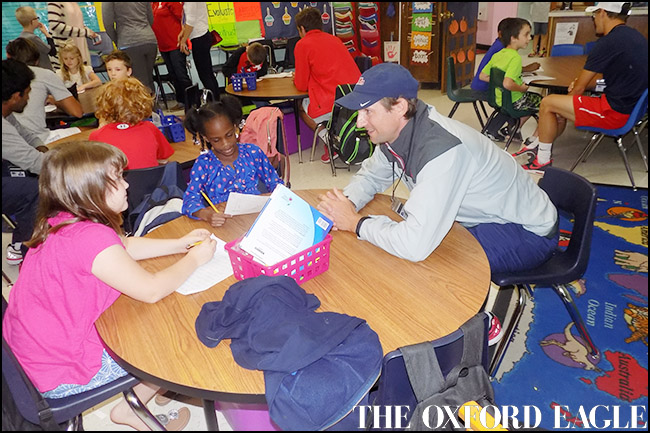 Catherine Boone Students in a Lafayette Elementary School second grade class interviewed University of Mississippi tennis players Friday. The students are learning writing skills and will continue to work with the tennis team during the fall semester.

Lafayette Elementary School second-graders have found a creative way to practice their writing skills by teaming up with Ole Miss tennis players.

Simms Haguewood’s second grade class invited the university’s tennis team to meet with students and get to know one another Friday.

Students were broken into small groups with the players and came up with interview questions to ask them.

Second-grader and baseball player Easton Thompson hoped that interviewing the tennis players could help him with his stance.

“I think I’m going to learn something about my stance — how you hit the ball and how your legs are set,” he said. “I’m going to use their stance one time and see if it works in baseball.”

Destany Brown said she was looking forward to asking the players what they liked to do when they were kids and learning more about the fun aspects of playing the sport.

“I think I’m going to learn that tennis is about fun and not just about hard work and doing stuff,” she said.

Haguewood’s class also will learn about persuasive, letter and journalistic-style writing through working with the players.

The class plans to send letters to the tennis team, write a persuasive letter to LES asking for a field trip to a tennis match and write articles about the team after conducting interviews.