COLUMN: Only consistency about Rebels’ D is inconsistency 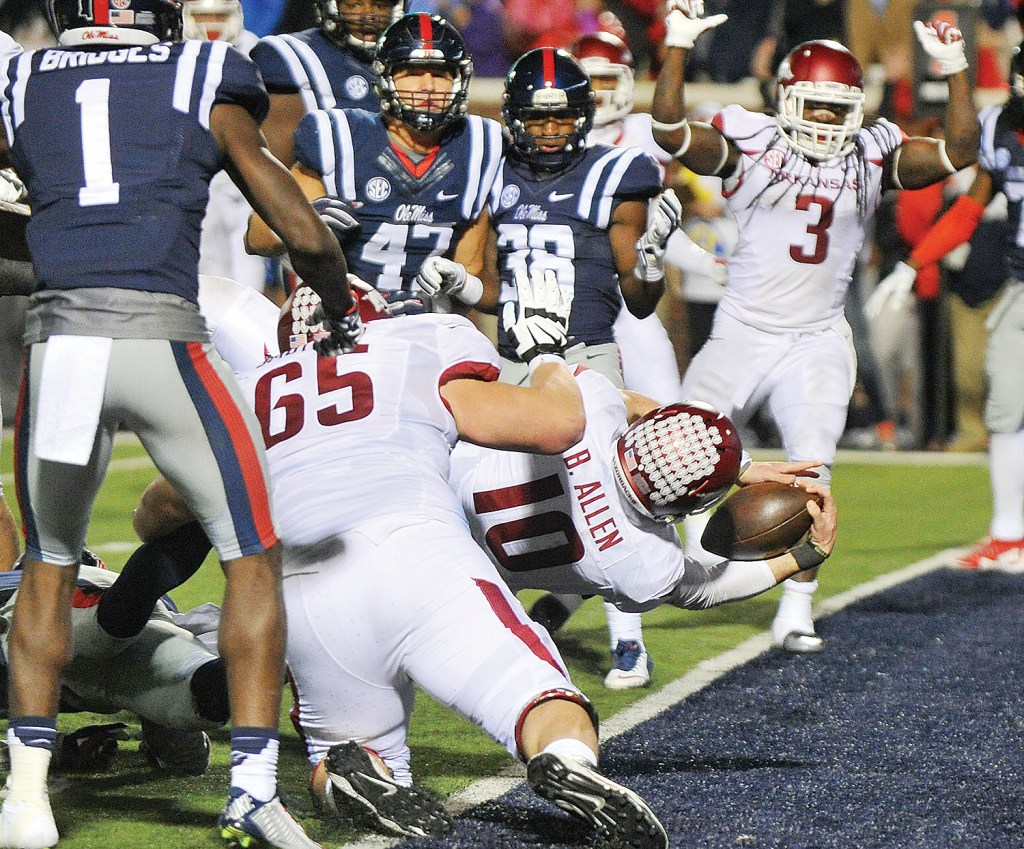 Arkansas quarterback Brandon Allen (10) dives in to the end zone for a two-point conversion during overtime of an NCAA college football game against Ole Miss in Oxford, Miss., Saturday, Nov. 7, 2015. Arkansas beat No. 19 Ole Miss 53-52 in overtime. (AP Photo/Thomas Graning)

Ole Miss’ offense was as impressive as it’s been all season Saturday.

Chad Kelly continued to produce big plays in the passing game and even eluded pressure at times to make 110 yards worth of plays with his legs. Wideout Laquon Treadwell had yet another 100-yard game with 132 receiving yards, Kelly threw for 368 in all, the running game continued its late-season production with 222 more yards, Ole Miss scored on all seven of its trips to the red zone and exploded for 52 points.

If I told you before Ole Miss’ game against Arkansas that those would be the numbers the Rebels would put up, you’d say the Rebels won their third straight game rather convincingly and stayed in control of their Southeastern Conference Western Division destiny for another week.

But all that production is just a footnote now.

Those 52 points? They’ll go down as the second-most Ole Miss has ever scored in a loss because of a defense that’s really hard to figure out.

Arkansas went up and down the field against the Rebels and finally ended what looked like an arena football game by going for two in the first overtime of its 53-52 win Saturday at Vaught-Hemingway Stadium.

Sure, the Razorbacks got some breaks. Hunter Henry had nowhere to go after hauling in Brandon Allen’s short pass on fourth-and-25 with Ole Miss up a touchdown after scoring on the first possession of extra time, so he pitched the ball backward in desperation. Alex Collins scooped it up and followed a convoy of blockers down the sideline for 31 yards and a fresh set of downs.

Ole Miss had the game won when Marquis Haynes finally got to Allen on the two-point conversion following the Razorbacks’ touchdown, but Haynes was called for a facemask that gave the Hogs another chance and ultimately the win.

But Ole Miss was in that position because the Rebels gave up 45 points and 575 yards in regulation.

Allen shredded a defense that looked like it had turned a corner the previous two weeks in wins over Texas A&M and Auburn. There were still some big plays, but Ole Miss limited them with better pressure up front and tackling on the back end to allow a combined 619 yards in those wins.

Arkansas (605) had almost that many by itself Saturday with Robert Nkemdiche, C.J. Johnson and Tony Conner all on the field for Ole Miss, copying the blueprint that Memphis and Florida made to expose the Rebels. Ole Miss put its defensive backs and linebackers in man coverage most of the night with an eye on Alex Collins in the backfield, and the Rebels couldn’t keep up.

Allen looked a lot like Memphis’ Jordan Lynch and Florida’s Will Grier on Saturday, turning in a career night by the time he was done torching the Rebels for 442 yards and six — six! — touchdowns. And that third-down defense that appeared to find itself against A&M and Auburn (8 of 35) looked like the third-down defense of old, allowing the Razorbacks to convert more than half the time (7 of 13).

Half a hundred points should always be enough to win a football game, but Ole Miss lost because a defense that’s been up and down all season fell flat.

And the unit’s consistent knack for being inconsistent likely squashed Ole Miss’ championship hopes for good.