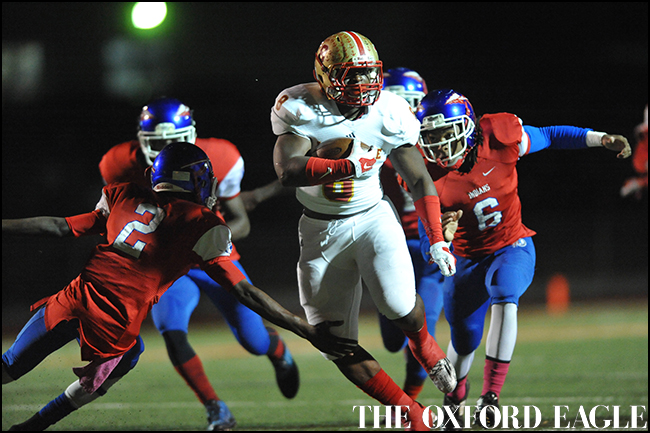 Throughout the season, Lafayette and Noxubee County were the talk of the North Half teams in Class 4A.

The teams will finally get to see who is better, even if it is a littler earlier in the playoff season than expected.

The Commodores (10-2) will travel to Macon for an MHSAA Class 4A second-round playoff matchup against Noxubee County (9-3) Friday night.

The Tigers were considered one of the teams to keep an eye on in 4A when the season began. Lafayette inserted itself into the conversation after an 8-1 start to the year, earning the top ranking in the Class 4A polls by the AP at one point this season.

Noxubee County enters this week’s game as the top team in 4A while Lafayette sits at No. 3

“We know we’re playing one of the best teams in the state Friday night,” Lafayette coach Eric Robertson said.

After a 48-7 first-round win over Gentry last week that was never competitive from the opening whistle, the real tests begin now for Lafayette, which hoped it would not have to meet the Tigers for another couple weeks until the North Half title game.

Due to the loss at Senatobia, Lafayette now has to get past one of its tougher challenges this week if it wants to keep its hopes of playing for a state title in their backyard alive.

“We’re definitely two of the top 4A teams and there’s some good ones out there,” Robertson said. “I think we’re two of the top. We haven’t really talked much with our team having to play (Noxubee County) in the second round. When we lost that Senatobia game, after that week, we just kind of tried to bury that. We’re just focusing on Noxubee now, regardless of when we have to play them. Sooner or later, you’ve got to go through Noxubee to get to the state championship. Hopefully they feel that way about us.”

The teams are no strangers to meeting each other in the playoffs. Since 2000, Lafayette and Noxubee County have met four times in the postseason with the record deadlocked at 2-2. Defense has proved key in the contest as the winning team has shut out the loser every game.

“We’ve met several times in the second round before and we’ve met in North Half before, but you’ve got to win the game whenever it’s played,” Robertson said.

It is a Noxubee offense that offers a little bit of everything. The Tigers have eight players who have rushed for more than 100 yards and five of those for more than 200. Seniors Shunnessy Sherrod and Timorrius Conner lead the Tigers’ ground game with 625 yards and 10 touchdowns on 149 carries combined. Junior Ty’quintin Ramsey is close behind with four touchdowns and 206 yards on 40 carries.

Conner is also the Noxubee County signal caller and has been just a lethal through the air, throwing for 2,244 yards and 17 touchdowns. He has completed 162 of 228 passes. Conner’s top targets have been senior Ladaveon Smith and Kymbotric Mason. Smith has 68 catches for 827 yards and six touchdowns while Mason has caught 26 passes for 542 yards and five touchdowns.

“They’re really multiple, probably more multiple than the teams we’ve played in the past,” Robertson said. “In the past, they’ve been more one dimensional, and that’s not the case now. … I compare their receivers a lot to the kids Oxford has.”

It could come down to who can establish the run game first as Lafayette has leaned on the legs of Tyrell Price all season. Price has a record 31 touchdowns and is seven yards shy of hitting the 2,000-yard mark. They will have to find a way past the big Noxubee defensive front anchored by senior defensive end Jeffery Simmons.

Price has had help with sophomore Jamarcus Quarles aiding in the run game in the second half of the season as well as junior Tay Tay Owens. It has allowed quarterback Will Ard to not be dependent on getting the Commodores’ offense going with soley his arm.

That could change Friday with a stout Tiger defense lining up across from them.

“Defensively, they’re Noxubee. They’re what they’ve always been on defense,” Roberston said. “It’s going to be extremely hard to run the football on them and hard to throw the football on them. When you think about Noxubee, you think defense. Of course, the Simmons kid, who’s definitely the best defensive lineman in the state and maybe the best in the country. He’s a player who can take over the game.”