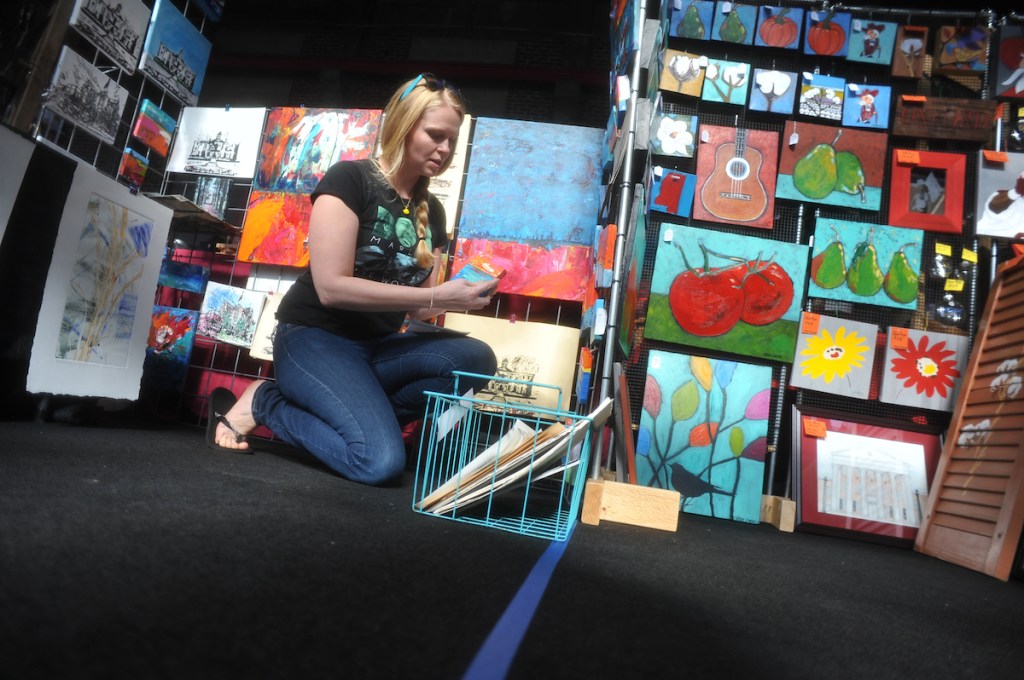 Amanda Wymer Fisher sets up for the Holiday Art Sale at the Powerhouse Community Arts Center in Oxford, Miss. on Thursday, November 12, 2015.

Prints of the Lafayette County courthouse, handmade wooden ornaments shaped like the Double Decker bus, and Mississippi-shaped fabric bookmarks in Ole Miss colors were some of the Oxford-themed gifts found at the Holiday Art Market held this week at the Powerhouse Community Arts Center.

The event, in its ninth year, featured 18 artist booths with handmade crafts, such as paintings, soaps, woodwork, ironwork, leatherwork, fabric goods and more.

Amanda Wymer Fisher, 34, and her mother, Debi Jenkins, were setting up their booth Thursday.

Fisher, a Lafayette High School and University of Mississippi art graduate, lived in San Francisco eight years before coming back to Oxford. She’s now a part-time Realtor who teaches yoga and does artwork on the side.

“I’ve started doing these linoleum prints of the courthouse, and I also did one of City Hall and the Double Decker bus,” said Fisher Thursday, standing in front of her work. “I thought they would make a really good Christmas present for Oxford people.”

Fisher said she came up with the idea for the prints while creating abstract landscapes and wanted to continue the theme in printmaking.

“I thought what better way to do that than with Oxford, the town that I love,” she said. “I just went and took a picture. Actually, it’s an older picture when the tulips were blooming in front of the courthouse. That was the first one I did.”

City Hall was next.

“I want to keep going with the series,” shes said. “I want to do some buildings on campus, like Ventress Hall, and other notable buildings around Oxford. This is just the beginning. I’ve been printing them on paper and on canvas. Now, I’m trying to go back in, give more detail, and make it pop.”

Fisher said she believes in making art accessible to everyone. That’s why she charges $10 for unframed prints.

Fisher majored in ceramics and printmaking at Ole Miss and worked in an art gallery in San Francisco.

“I kind of got away from making art, but in the last couple of years, since life has slowed down, I’ve been trying to do it more,” she said.

Texas native Pam Locke, 59, spent 16 years in Greenville before moving to Oxford in 2003.

“I started as a graphic artist,” she said, “and a few years ago, my children graduated and went to college, and I had more time to paint, since I wasn’t being a band parent.”

Locke sells wooden ornaments that are prints of paintings she’s done for $10 each. She cuts them out with a saw.

“I broke three blades in the last two weeks,” she said. “Either I don’t have it adjusted quite right, or I’m making too tinier cuts for a band saw.”

She also sells Ole Miss and Oxford note cards that some have bought and used as Christmas cards.

“Mostly, I like to think I paint memories,” she said. “A lot of people have had good experiences here in Oxford, and that’s what I paint.”

Emily Rennie, 38, who is from South Jackson, New Orleans and, now, Calhoun City, sells wooden blocks with Colonel Reb painted on them that can be used as ornaments.

She also sells magnets with popular phrases, such as “Hotty Toddy” and “Fins Up.”

“I’ve actually got some repeat customers here in Oxford that say they’ve cleared off their refrigerator, and they only use my magnets,” she said.