With the season coming down the homestretch, Ole Miss stormed out of the gates and then held off LSU 3-1 at the Gillom Sports Center on Sunday to set the school record for home wins and move to .500 in the Southeastern Conference.

Hitting .524 in the first set, the Rebels jumped all over the Tigers early going up 11-5.  They never relinquished control, winning 25-11. Out to a 13-5 lead in set two, it looked as if Ole Miss would win in three rather quickly. But the Tigers battled back going on a 9-3 run to get within two, 16-14. Leading 23-22, the Rebels won the final two points on a huge kill by freshman Kathryn Cather followed by an ace from junior Kristen Brashear to for 25-22 and a 2-0 lead in the match.

LSU carried momentum from their late surge in the second set over to the third set coming out of intermission. Both teams battled back and forth in the third set, but the Tigers used an 8-1 run to break open a 17-17 tie and win the set 25-18.

Set four LSU let 12-7, but the Rebels took over the lead on an 8-2 run and never trailed again. After LSU tied it at 23, sophomore Kate Gibson threw down one of her team-leading 13 kills and then a ball handling error from LSU handed the Rebels the set 25-23 and the match, 3-1.

— It marks the second year in a row, the Rebels have equaled or surpassed the most home wins in school history after finishing 12-4 last year.

— After Sunday’s win, the Rebels will be in a tie for fifth in the SEC standings with four matches left.

— The Rebels improved to 18-1 overall and 7-0 in the SEC win winning set one. They also won for just the second time when hitting below .200. 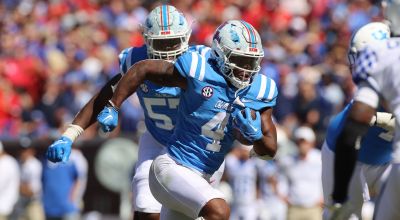