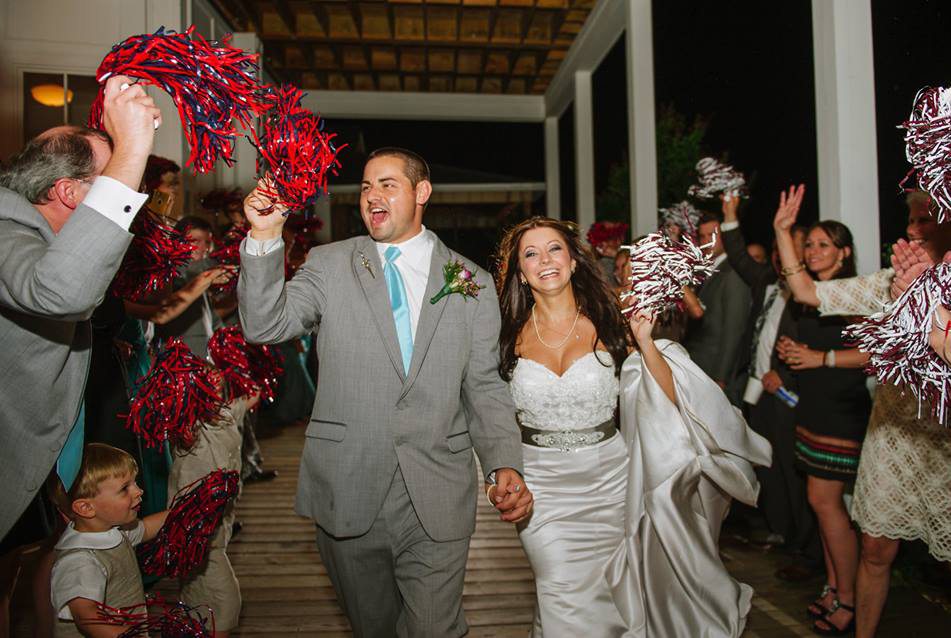 April & Paul Photography Rush Mayo and Hannah Yates made their allegiances to University of Mississippi and Mississippi State University clear from day one while walking down the aisle and still keep up the tradition, as seen below, when tailgating on game days.

Oxford residents Hannah Yates, 24, and Rush Mayo, 32, met at the Neshoba County Fair where their cabins were five doors down from one another.

Rush showed up on Hannah’s porch one night, and the “instant friends” talked until the next morning, but they didn’t begin dating until Halloween 2011.

The Mayo and Yates families had been intertwined for years because they are both originally from the Mississippi Delta. Yet, despite their commonalities, one major factor divides the Mayos. Hannah is a Bulldog, and Rush is a Rebel.

She attended Mississippi State University, graduating a semester early in December 2012 with a bachelor’s degree in political science.

She now works as a receptionist and “jack-of-all-trades” at the Mayo Eye Center in Oxford.

Hannah’s most memorable MSU experience was attending the Egg Bowl on Thanksgiving Day in Starkville as a teenager.

“My dad had taken me and my brother,” she said. “We sat in the lower section right on the 50-yard line. State did not get a good start, and it was looking pretty bleak. We, like true maroon State fans, were going to stay until the clock said 00:00.

“In the last eight minutes, State came back and won the game. I remember jumping up and down, screaming, and hugging strangers. We walked out of the stadium ringing our cowbells. It was glorious.”

Rush Mayo traveled a lot because his father was in the Navy, but he calls Oxford home because it’s where he’s spent most of his life.

His family roots go back more than a century in Lafayette County, and the couple now attends the church in which his great grandparents were married.

Mayo graduated from Ole Miss with a bachelor’s degree in business administration and marketing. He is now the senior e-commerce developer for Premier Prints Inc., where he manages the development, release and maintenance of e-commerce business strategies for two websites.

Rush said his most memorable Ole Miss experience was the “100 Shutout” in Starkville.

“It rained so much at that game that my socks were soaked through my boots,” he said. “Most of the game was scoreless. With all the rain, Eli (Manning) wasn’t able to pass as much, but somehow he and the receivers were able to pull out some touchdowns.

“What made it great, other than the shutout, was that it was Jackie Sherrill’s last game, and we annihilated them.”

“We had maroon/white and red/blue pom-pons at our reception,” Hannah said. “We used them on our exit and also as our wedding favor.”

The couple’s names and wedding date were printed on the handles.

“Rush’s groom’s cake was Ole Miss, and my cake table had MSU stuff on it along with my cowbell,” she said. “We married at The Mill at Plein Air on June 28, 2014. We chose that date because it wasn’t during football or baseball season.”

Egg Bowl week is hard for the couple, but fun.

“We try really hard to not get too invested, but come on. It’s the SEC. How can you not be?” Hannah said.

“We talk a lot of smack. We talk smack all the way up to the very end of the game because, as we all know, anything can happen. This is how it is always though. We talk smack year-round, but it’s especially heightened during football and baseball.”

The Mayos say they have learned patience being in a Bulldog/Rebel marriage.

“It’s hard losing,” said Hannah Mayo, “but it’s just as hard being the winner and not being obnoxious about it. We have learned to just take it as a game, because that’s what it is ultimately — just a game. We can have fun with it, and there is always next year. Rush has learned to take earplugs to Starkville.”

Hannah said the couple has two rules about game days.

“1. Smack talk all you want the week leading up to the game. 2. Once the game is over, that is it. Nothing else. Period.

“We do not make bets on the game because I know that if we were to say, ‘Whoever loses has to wear the other team’s colors,’ that it would end up in a full-blown argument before ultimately nothing would ever happen.

“We respect that our love for our teams are a deeply ingrained part of who we are. I would never ask Rush to put on MSU colors, because I know he wouldn’t, and I wouldn’t want him to ask me to put on Ole Miss colors.”

Hannah: “I think State is going to win, obviously. The teams are pretty evenly matched skill wise, I think, but we all know that especially in rivalry games, home field advantage is everything. Whether you have prepped with cowbells, or yelling or anything else, that day is a completely different atmosphere than anything you can anticipate or prep for. Wrap it in maroon and white. Hail State.”

Rush: “Hotty Toddy. Rivalry games are always tense. This year, though, there is a lot riding on this game. With Ole Miss’s epic win over LSU, I believe our momentum has really kicked into another gear. Chad Kelly is running fearlessly and breaking records throwing. DeMarquis looked solid. And State’s D just can’t handle us.”

Both couples offered advice for other Rebel/Bulldog marriages.

Hannah: “Respect the love one another has for their team. Remember it’s just a game.”

Rush: “Be gracious winners as well as losers.”