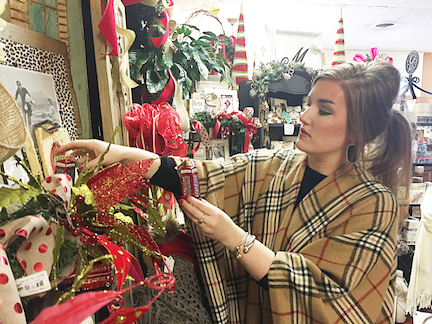 Erin Briscoe, owner of Olive Juice Gifts at 305 S. Lamar Blvd, has a number of Oxford-themed ornaments to choose from, including some of the Double Decker bus, a red phone booth, pottery ornaments shaped like the state and hand-painted ornaments featuring Ole Miss themes.

It won’t be long until Santa comes, and many Oxford residents have already begun trimming their tree. For those who want to hang a little piece of Oxford from its branches, you can find a number of Oxford-themed Christmas ornaments around town.

Erin Briscoe, seen above, owner of Olive Juice Gifts at 305 S. Lamar Blvd., has a number of Oxford-themed ornaments to choose from, including some of the Double Decker bus, a red phone booth, pottery ornaments shaped like the state and hand-painted ornaments featuring Ole Miss themes.

You can also find Oxford-themed ornaments at The Mustard Seed Antique Emporium at 1737 University Ave., where there were a number of wooden ornaments in the shape of the state with Oxford-related words on them and one glittery Colonel Reb ornament.

One is even painted with the Faulkner-credited quote “To understand the world, you must first understand a place like Mississippi.”

“I have a traditional phone booth,” she said. “I guess the rest of the ornaments would be more Ole Miss-themed. I have a black bear and a cheerleader.”

And at The Depot Antique Mall at 709 N Lamar Blvd., you’ll find wooden, belled ornaments with the words “Hotty Toddy” painted on it.