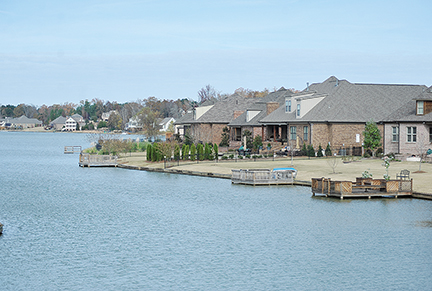 Wellsgate has a unique story about how the subdivision received its name.

Harley Garrett served in the Reserve Officers’ Training Corps at the University of Mississippi.

After graduating in 1963, he joined the Air Force and spent 23 years serving his country, including a tour of Vietnam.

The retired colonel later worked at the Pentagon developing weapons systems before becoming one of the first homeowners in the Wellsgate subdivision.

“We were the first house in Wellsgate,” said Garrett, “and we lived on the east side of Wellsgate since the beginning. We just sold the first house and moved over to the other side, so we have a lot of boxes to unpack.”

While living in D.C., Wells said he and his wife decided to move back to Oxford, so they bought a lot in what would become Wellsgate.

“That’s how we wound up building the first house in Wellsgate,” he said.

“Fast forward, and I’m living in Virginia in 2001, and my wife was already here in Oxford to build the house.”

In Virginia, he coincidentally met someone who told him he was the grandson of a Mr. Wells who once owned the property the subdivision was being built on.

“I did my own research on it, and there was a W.E. Wells who graduated from Ole Miss back in 1888 or 1889,” said Garrett. “His sons were Mississippians.

“I don’t know which ones owned the property, and I don’t know who bought it, but it did belong to that family. I was never able to verify all that, but it is what the young man from Virginia, Wells’ grandson told me.”

That’s how Wellsgate got its name.

Garrett said the population of Wellsgate is now about 700. They have some absentee homeowners who have purchased second homes there.

“When we moved in, there was no homeowners association,” he said. “They now have one.”

Frank Sibley is president of the Wellsgate HMO. He has lived in Wellsgate’s Charleston Court area a little more than 10 years.

Wellsgate began around 1999, said Sibley, referring to the subdivision’s development.  In the 15 years, approximately 500 new homes have been built in Wellsgate, comparing it to other developments like Grand Oaks. Both of these subdivisions continue to grow, with Wellsgate averaging about 25 new homes a year.

Sibley said the Grand Oaks subdivision in Oxford and Wellsgate are about the same age, and both continue to expand.

Sibley said Wellsgate features eight miles of roads and a 140-acre lake that is a little more than a mile long. Homes range from $250,000 to more than a million.

“We have a very active board of directors,” said Sibley. “There are individuals within the community who are responsible for lake maintenance, dam maintenance, and architectural review for the subdivision. Wellsgate also has a website and a Facebook page, which is maintained by Harry Addington, our secretary/treasurer.”