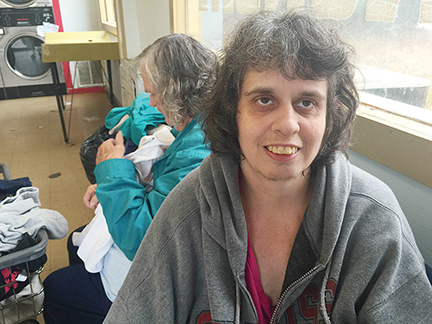 LaReeca Rucker The Dart found Becky Fisher at a laundry mat on North Lamar Saturday. The Oxford native enjoys working, spending time with her boyfriend and her cat.

Oxford resident Becky Fisher, 43, was found inside the laundry mat on North Lamar Saturday waiting with a family member to wash and dry a buggy full of clothing.

“I’ve been living in Oxford since I was a baby,” she said.

Fisher, who attended Lafayette High School, said she has fond memories of being in school.

However, today, Fisher works part-time at a local restaurant, where she has been able to earn money to help her family.

“I work at McDonald’s,” she said. “I make a little bit of money to help out from month to month.”

Some of her responsibilities include cleaning.

“I do the main lobby,” she said. “I wipe off the tables. Sometimes, I help my sister. We both work at McDonald’s.”

Fisher said her mother drives both sisters to work.

She said the best part of her job is getting paid.

“I like to get paid every two weeks,” she said.

Fisher said she attended church on Thanksgiving and enjoyed the events.

Most of the time, she enjoys spending time with her boyfriend and her cat, Scuba.

She said she’s ready for Christmas, but thinks the holidays come a little too close together.