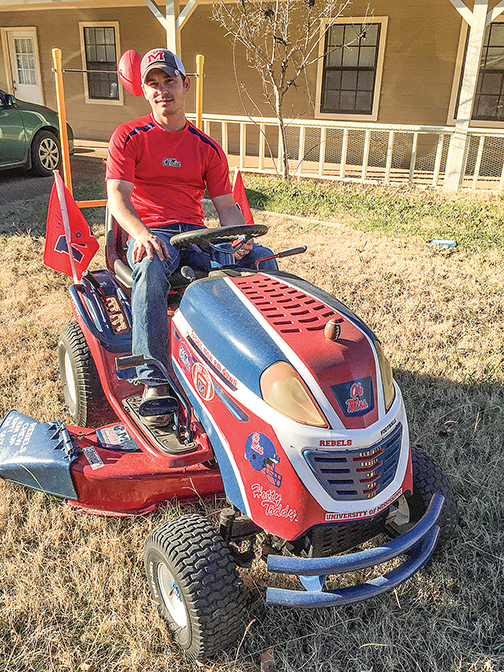 LaReeca Rucker Jeremiah Alexander is such a big Ole Miss fan he even has a themed mower.

Everyone knows that when the Ole Miss Rebels get their motors running, they will cut their opponents down to size.

Lafayette County resident Jeremiah Alexander, 33, has a physical representation of that idea. Alexander may very well own the only Ole Miss-themed lawnmower in the country.

“My mom and stepdad know I’m a big Ole Miss fan,” said Alexander, who has lived in Lafayette County since 2003. “My stepdad just had the idea of getting a mower and fixing it up. He did the design and everything.”

Alexander said his stepfather, Raymond Brown, bought a lawnmower, repaired it and painted it with an Ole Miss theme.

“He went to a place where they have junk mowers, bought a mower that wasn’t working, painted it, and fixed it up really nice,” said Alexander, who graduated from Northwest Community College with an associate’s degree in criminal justice. He plans to earn a bachelor’s degree from the University of Mississippi in the future.

Brown said he purchased the junked lawnmower for $50.

“I got it up here on the porch and started working on it,” he said. “The more I worked on it, I thought that it would be a good Ole Miss mower. I did one thing to it, and it growed and growed,” he said . . . kind of like grass.

Brown, who is disabled, made it a summer project at his home at 41 A County Road 178.

“It took me most of the summer,” he said. “I worked on it off and on for about four months.”

The lawnmower is red, white and blue.

“I built a goal post on the back of it,” he said. “I went into ACE Hardware, and I got PVC pipe and made a goal post.

“It’s got a little hood ornament on it like old cars used to have,” he said. “That is a plastic Easter egg that looks like a football.”

He also added various Ole Miss stickers that he collected at different locations and painted phrases like “Rebels chew ‘em up and spit ‘em out.” The license plate reads: “Your ass is grass. Rebels are the mower.”

Brown said there wasn’t a special reason he created and gave the lawmower to his stepson.

“We are both disabled and getting up in age,” Brown said, referring to himself and his wife. “He helps us out now and then. We only live about a quarter of a mile apart.”

Brown said he wanted to give his stepson something no one else has.

“He’s just as proud as a peacock about it,” he said. “He absolutely refused to mow with it, but it will mow. I made sure everything worked on it.”

Alexander said he’ll never mow with it. He just wants to show it off. He said Brown was very detailed in his work. Even the air caps on the tires are small footballs.

“It’s awesome,” he said. “It’s definitely something. If you’re an Ole Miss fan, you would enjoy seeing it. It’s used to mow down other teams.”