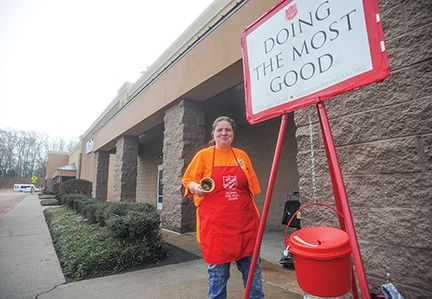 Bruce Newman Donna Horton rings a bell on behalf of Salvation Army, at Walmart in Oxford this morning. More volunteer ringers are needed at the kettles.

The Salvation Army is asking the LOU community to make sure every child wakes up Christmas morning with presents from Santa or one of his many helpers.

Each year, the Salvation Army puts up a tree filled with paper angels. Those angels represent a child living in Oxford and Lafayette County who is part of a family who needs a little extra help this Christmas.

On each angel appears the child’s first name, their clothing and shoe sizes and a particular type of toy that’s been on their wish list for Santa this year.

While a good many of the angels have already been “adopted,” there are still plenty left hanging on the tree located inside the Salvation Army thrift store on West Oxford Loop.

There used to be several trees located around Oxford but this year, the SA decided to keep it at the store.

“We would have angels being knocked off and getting lost,” said SA executive director Lisa Coleman. “So now we keep the tree here.”

There were 395 names on the tree this year, which doesn’t include an additional 150 names that are taken by the Oxford-University United Methodist Church before they even make it on the tree. Parents apply to be part of the Angel Tree by filling out an application. That deadline passed last month. Other names are received through recommendations by Communicare and other local organizations who work with area families.

“We are not going to let a child not have a Christmas this year if we can help it,” Coleman said.

After adopting an angel, Coleman asks that those thing purchased for the child are brought to the Salvation Army by Dec. 16 to give volunteers time to get all the donations together available for the families to pick up.

Gifts should be new and unwrapped, even the clothing.

“One year we had someone give two very nice, new sweatshirts,” she said. “Except they were from casinos. We couldn’t give those to children.”

Donors are able to put their gifts into a gift bag that can be examined or a gift box that is not taped shut.

Coleman said some choose to just donate new clothing or toys instead of choosing a particular angel off the tree.

“That’s welcomed as well,” she said. “We can use those thing to supplement those angels that haven’t been selected off the tree.”

And of course, cash donations never hurt in case SA needs to purchase additional gifts to make sure all angels are covered.

There are about 80 angels left on the tree.

If you’d like to do something else to be an angel to someone, the Salvation Army also is looking for volunteers to ring the bell at area stores during the holiday season.

The bell ringing is the organization’s biggest fundraiser and is referred to as Kettle Season. To many, it’s just not Christmas time until the bell ringers, standing near the famous red kettles, are jingling their bells in front of Walmart, asking for whatever a shopper can spare to help fund the many programs the Salvation Army participates in to help low-income families throughout the year.

“We ask volunteers to donate at least an hour,” Coleman said. “It’s a great idea for churches and other groups where several people can take a one-hour shift to ring the bell.”

Coleman said every penny collected by the bell ringers stays in Oxford and Lafayette County.

The Salvation Army is also looking for donations of blankets, warm socks and sweaters.

“Many are worried about their heating bills and do without it,” Coleman said.

McGregor to serve as president of LCSD board