Couple sparks movement to help others 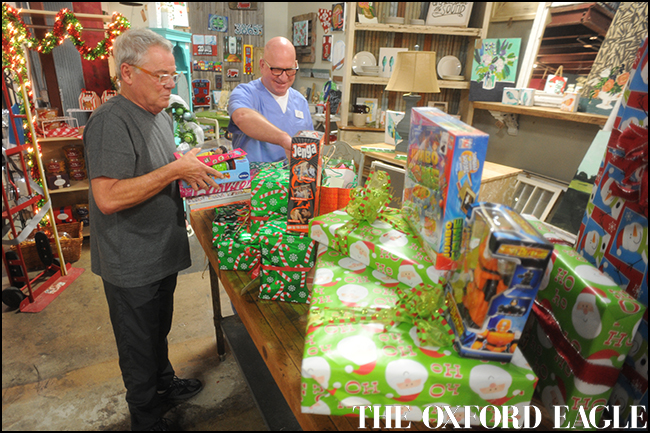 Curtis Knight, left, and Terry Lytal gather up presents for "Oxford Cares About People and Kids" in on Thursday.

Oxford resident Curtis Knight, 59, and his partner, Terry Lytal, 61, had an idea.

They wanted to do something to help Oxford’s less fortunate residents. So they created a Facebook group called “Oxford Cares About People and Kids,” and in a matter of days, donations began pouring in.

“Terry and I decided, since we have no children, and our nieces and nephews have gotten big enough and have families they are taking care of — even though we still do Christmas with them — we wanted to do something with our community locally,” said Knight, an interior designer who graduated from the Art Institute of Atlanta. “All I did was post on Facebook that Terry and I wanted to donate some clothing and gifts, and we needed suggestions. Five minutes later, my phone blew up.”

Taken aback by the instantaneous response, Knight and Lytal began fielding phone calls from Oxford residents who wanted to know how they could help. By Sunday, the Facebook group had grown to 1,600 members.

“People really jumped on the bandwagon with us, and really came in with full-blown support,” Knight said.

Knight and Lytal decided they would first focus on children who stay in Le Bonheur Children’s Hospital’s FedExFamilyHouse.

One of Knight’s trucks filled with toys will arrive at the FedExFamilyHouse Sunday, Dec. 20.

They also wanted to help local children. A fundraiser will be held today, in the parking lot of Sugar Magnolia Antique Mall at 1919 University Ave. in Oxford.

Knight said they will be asking school guidance counselors to identify children in need. And on Christmas Eve morning, Knight and Lytal plan to go to Baptist Memorial Hospital with gifts.

“We’re going to find out what children are there and their age groups,” he said. “If we’ve given away everything that we have collected, Terry and I — out of our own pockets — will make sure that any child who is hospitalized over Christmas will have Christmas in their room.”

Knight said community members have made many donations in a short period of time.

“It’s just never-ending,” he said. “The giving this community wants to do for such a huge need. I had no idea that Oxford had this much of a need. I didn’t know there was this many people who were struggling this hard.”

“She helped us start it, and she’s taken the position that she’s going to make it happen the way we want it to happen,” he said.

Knight said the group currently is working through the Facebook page, so those who want to donate should contact them through the page.

“It’s just unbelievable in six days,” he said. “I have shed a lot of tears. These people in Oxford have really shown true blue friendship to me and Terry, and I could never repay it. This feels so good, it won’t be the last time. We may not even wait for next Christmas to do something to help some of these people.”

Knight said he was particularly moved by the story of one little girl he heard about in recent days.

“Her request was, could she please have a set of sheets,” he said. “Not toys, not Cinderella, not princess anything. And the reason she wanted a set of sheets is because her towel wouldn’t fit her bed. That’s the kind of stories we’re hearing.”

Knight said another boy has been named Oxford Cares’ first Christmas elf. His mother wrote Knight and told him her son, 10, said he didn’t want anything for Christmas. Instead, he wanted to help others.

“He is our first elf,” Knight said. “He is going to help us all day Sunday. He’s going to go to Le Bonheur with us.”

Lytal said the response has been unbelievable.

“At first, I didn’t really know what to think, because we were sitting and talking, and I just kind of lightly mentioned it,” he said. “It just started evolving. And when we got it on Facebook, it kind of exploded, and all these people started coming out of the woodworks wanting to do something to help.

“It’s really been a wonderful response from the Oxford people.”

Lytal said many people who no longer live in Oxford have sent checks.

“People have been so kind and generous,” he said. “My hope is that we can bring a whole lot of joy to as many people as possible who need it, especially the local people. It just gives you a heartwarming good feeling to be able to help somebody. We take our good fortune and put it to work.”