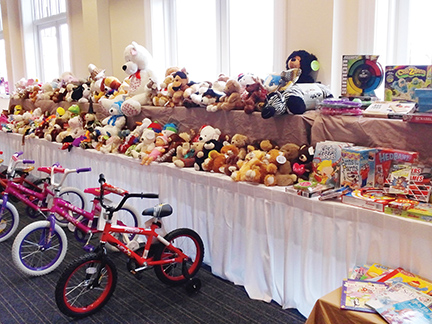 File Children’s toys and bicycles are laid out for the 2014 Books & Bears event, ready for distribution.

Zach Wadley, 18, is a freshmen journalism major at the University of Mississippi.

When he isn’t studying, he helps out with Books & Bears, a UM charity designed to provide Christmas gifts for families of campus service workers.

Wadley began helping with the program two years ago as an Oxford High School student.

“My mom has been helping with it for a while now,” he said. “If I was exempt from an exam, she would bring the Books & Bears, and I would go pick up boxes and things that have been collected and interact with the people who have spearheaded the program.”

Jackie Certion, a senior academic adviser at the University of Mississippi, is Wadley’s mother and one of the leaders of the Books & Bears program. This year marks the program’s 18th year. It is sponsored by UM’s Black Faculty and Staff organization.

Certion said Books & Bears was created as a way to show appreciation for service workers. This includes physical plant workers, groundskeepers, custodial staff and others.

“Without them, there is no way our university would function,” she said. “It’s just a way to say ‘Thank you’ because we know the holidays can be stressful. Hopefully, this will relieve some of the financial stress.

“Just to see the smiles on their faces when they are able to get these items for their children, nieces, nephews, or grandchildren – it’s a way to show our gratitude.

Certion said more than 200 service workers attended the reception last year when Books & Bears gifts were distributed. The reception is always held on the last Friday before university workers leave for winter break, and it will be held this Friday at 10 a.m. in the ballroom of the Inn at Ole Miss.

Certion said they will be collecting donations until Thursday, Dec. 17. There are several donation drop-off locations around campus.

“We set the Books & Bears and all the toys up,” Certion said, describing the reception. “The workers come and sit down. We pass out numbers.”

Numbers are drawn for bigger items like bikes, and they usually give away 10-12 bikes each year.

“We’ve had so many donations in the past, our service workers were able to go around two or three times,” Certion said.

She said students from Gamma Beta Phi – Honor Society have donated thousands of gifts. Student athletes also held a gift drive during one of their ballgames.

Wadley said he remained involved with Books & Bears in college because he enjoys giving back.

“We’ve always been taught that when you’re blessed, and you have the opportunity to give back, that you should,” he said. “I always want to do it every year. It’s just giving back to the community and making someone’s Christmas brighter than it was.”