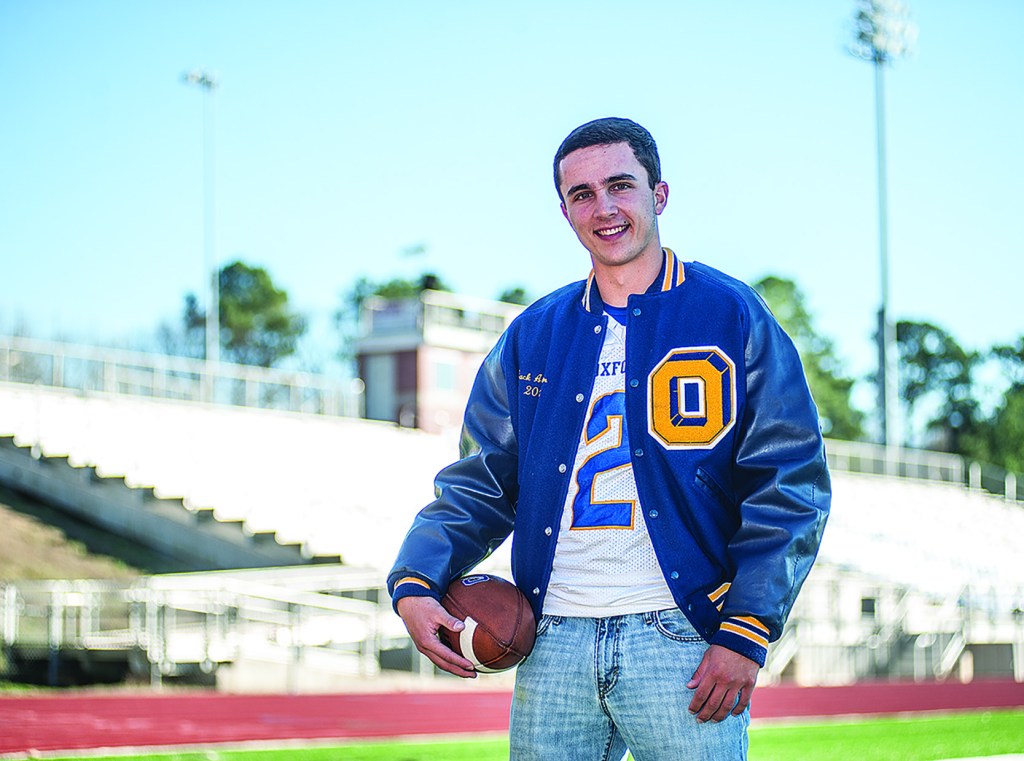 Johnny Hill spent more than two decades of his 40-yard coaching career watching quarterbacks come and go at Oxford, but the Chargers’ outgoing coach said none of them have made pitching the ball around look as easy as his last one.

In fact, no Oxford signal caller has ever had a season quite like Jack Abraham did this fall.

Abraham, the Chargers’ senior quarterback, capped his career with a season that statistically stacks up among the best in the nation to earn EAGLE Player of the Year honors. The 6-foot, 195-pound Abraham averaged more than 339 yards passing a game, finishing with 5,091 yards and 57 passing touchdowns, both single-season school records.

His yardage total ranks fifth nationally, according to MaxPreps. He was recently named the Mississippi Gatorade Player of the Year, the first Oxford football player to ever earn that distinction.

Abraham, a two-time EAGLE Player of the Year winner, shattered his own records of 3,304 yards and 38 scoring tosses set as a sophomore in 2013. He raised his completion percentage to a career-best 65.8 while cutting his interception total to a career-low six after combining to throw 22 in his first two years as the starter. He finished with a passer rating of 131.9.

“Just limiting mistakes. I feel like I kind of improved on that this year,” Abraham said. “Just making sure I made the right decision, made the right reads, found the safety in the coverage and all that stuff. It’s definitely something I focused on is getting better in the mental game and obviously working on the physical game as well.”

Abraham paced an offense that caught its stride after a pair of back-to-back losses to eventual 6A champion Starkville and Madison Central in the season’s first three weeks to average more than 41 points per game. He threw for at least 308 yards in eight of Oxford’s final 12 games and tossed a season-high seven touchdowns against New Hope on Oct. 16.

“We just used those two losses as motivation,” Abraham said. “That had never happened to us before. We had never lost two games in a row in our entire career. That was kind of something new for us.”

Abraham’s play helped the Chargers coast to another Region 1-5A title and a third straight appearance in the MHSAA Class 5A state championship game, where he saved his best performance for last. Abraham did all he could to keep Oxford close in a back-and-forth tussle with Wayne County, torching the War Eagles for a career-best 550 yards and four touchdowns on 34 completions, before the Chargers fell, 45-41.

Not delivering a state championship for Oxford is the only regret Abraham has about his time under center.

“It’s been fun,” Abraham said. “I’m going to miss all the memories and stuff. Obviously we didn’t finish the three state championships off, but I feel like we left a legacy there.”

Abraham’s emergence as the state’s top prep quarterback was molded from an early age playing pee wee Buccaneer football for his father, Michael, a former high school quarterback himself. Hill, who called Abraham’s delivery “flawless,” knew he had a quarterback that was ahead of the curve when Abraham joined the varsity team as a freshman.

“I think the knowledge this guy had at such an early age has made him that much better,” Hill said. “He knew a lot of this as a sophomore. A lot of quarterbacks don’t know what he knows their senior year when he was sophomore. I think that kind of gave him an edge on those things.

“He has such a quick release, and he knows where the ball needs to go most of the time before the ball is ever snapped. He’s so accurate.”

Wadlington earned a spot as the area’s top all-purpose player after accounting for 1,701 total yards. The speedy running back was the area’s fourth-leading receiver with 644 yards. Skidmore, a three-year starter at center, and Swindoll, who just finished his second season as the starting right tackle, helped pave the way for the area’s top offense.

Turner replaced four-year starter Mike McGhee at linebacker and finished as the area’s top tackler in his final season, piling up 153 stops for an average of more than 10 a game. Harmon was the Chargers’ top tackler along the defensive line with 95 tackles.

Hilliard led an active Oxford secondary with an area-best six interceptions from his safety spot while Thomas had 12 pass breakups and tallied 97 tackles, second-most on the team. Rockette, a cornerback, led the area with 20 pass deflections in his first year as a starter.

Cooper was the area’s top punter, averaging 35.1 yards on his 26 kicks with his longest going for an area-best 51 yards.

Price, the Commodores’ senior running back, was the biggest threat to Abraham in the Player of the Year race after racking up 2,053 yards and 31 rushing touchdowns on just 249 carries. Price, a three-year starter, eclipsed the 200-yard mark five times, including a season-best 267 yards against Grenada, while being held to less than 105 yards just twice.

Johnson, the Commodores’ right tackle who’s committed to Ole Miss, and Matt Toles, a guard, were key cogs in helping give Price room to operate up front for the area’s top rushing offense, which cranked out 211 yards a game on the ground.

Lewis and Keontre Toles make up half of this year’s defensive linemen, combining to make 187 tackles for the area’s top scoring defense (12.2 points per game). Lewis was a force off the edge with an area-best 15 sacks and 17 hurries while Keontre had four sacks.

Jones, who played linebacker and safety, led the Commodores with 111 tackles, third-most in the area, and also tied for the team lead with three interceptions. Reed racked up 96 tackles from his linebacker spot and had a pair of fumble recoveries.

Langley was the area’s most consistent placekicker, converting on 90 percent (37 of 41) of his extra-point attempts and connecting on three of his four field goals with a long of 33 yards.

Horton might have been the area’s most versatile player, once again doubling as a safety and a situational quarterback. The senior posted 87 tackles, invaded the box to make 11 tackles for loss and pulled down four interceptions, which tied for the team lead.

On offense, Horton ran for 501 yards and 10 TDs while throwing for five more. Gooch was a versatile three-year starter on the Blue Devils’ offensive line, alternating between center and right tackle.

Faustin, a senior linebacker, averaged nine tackles a game in his final season at Water Valley and finished as the area’s second-leading tackler with 117 stops. Ray was a constant in opponents’ backfields as the sophomore defensive end notched an area-best 18.5 tackles for loss and led the Blue Devils with six sacks.