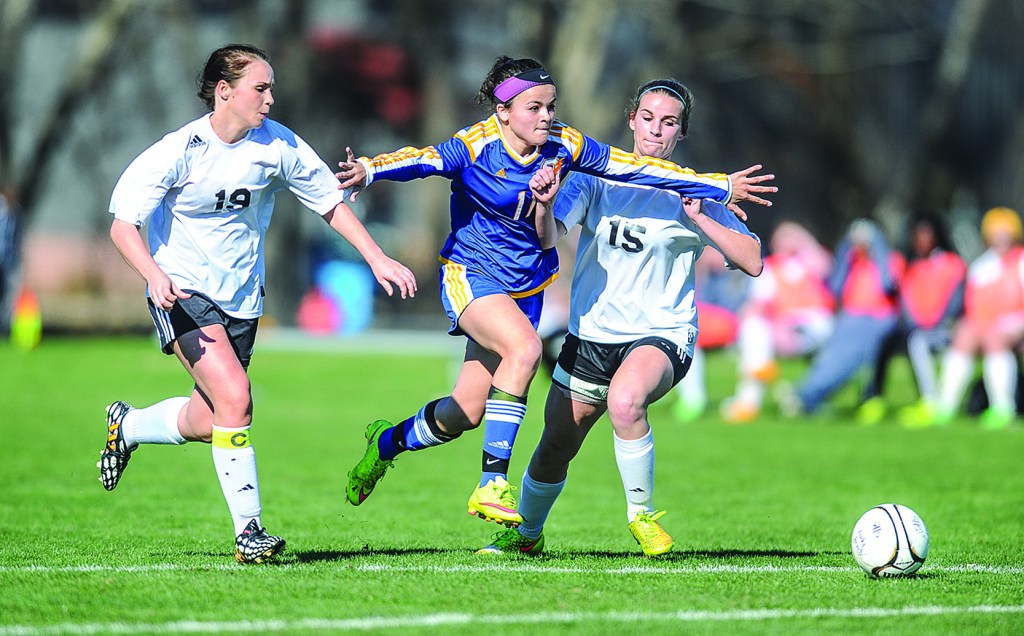 After earning a big win over Northwest Rankin last weekend, the Oxford girls soccer team feels it has found something.

The Lady Chargers used an offensive explosion to sweep their pair of games in the Oxford Showcase, defeating Starkville 6-0 and Horn Lake 7-0.

“I think we turned a corner last weekend,” Oxford coach Hunter Crane said. “We figured out what we wanted to do and who we wanted to be. Kind of a light bulb went on. We beat a very good Northwest Rankin team last weekend and got a real boost of confidence there. It translated to this weekend.”

The day began with Oxford (9-4) taking it to the Yellowjackets of Starkville Saturday morning with forwards Morgan O’Connor and Ally Shinall scoring two goals each. Katelyn Rock and Grace Ann Joyce added a goal each.

It was more of the same in the Chargers’ afternoon tilt against Horn Lake, spreading the scoring around with six different players finding the back of the net. O’Connor, Shinall and Rock added to their goal total for the day with Zoe Scruggs, Anna Dennis and Madisyn Longnecker pitching in as well. Longecker scored twice, coming in the 11th and 22nd minutes.

Oxford did not waste time as it scored in the third and fifth minutes for the early 2-0 lead and continued to pour it on.

“We spread the wealth,” Crane said. “Our center midfielders controlled the game from start to finish. They found feet up top, and it was exciting to see a lot of goals in the back of the net.”
After three straight wins against 6A opponents, it has Crane excited about what the rest of the season will bring coming off the holiday break and into region play.

“It’s encouraging because (Starkville and Northwest Rankin) are quality teams,” Crane said. “That’s a different level, and there’s different talent there. When you can beat quality teams in the 6A ranks, it kind of gives you confidence moving forward at 5A.”

‘Dores suffer first setback
The defending 4A champions were hit with their first obstacle of the season Saturday, suffering their first loss with a 4-1 defeat to Brandon. Lafayette started the Oxford Showcase with a 3-1 win over Florence Friday night.

Lafayette coach Melinda Scruggs always wants to schedule Florence during the annual weekend event to see what her squad will expect in a couple months during the playoffs. The Commodores were able to handle that test with Alley Houghton recording all three goals.

The Commodores (8-1) were not able to keep the momentum going as they met one of the powerhouses of 6A in Brandon.

“I was so excited to play a team like (Brandon) because that’s how you get better, by playing teams that are better or equal to us,” Scruggs said. “I was really pleased (Friday). The girls came out and they did a great job. Today I am super proud of what they did. Brandon is No. 1 in the state right now, they’re 6A. They have so much depth and just a very talented team.”

Lafayette struck first with a goal by Maddy Houghton in the 20th minute when her shot deflected into the Brandon goal. The lead was short-lived though as Jocelyn Jones tied things up for Brandon in the 27th minute to send the match into halftime with a 1-1 score.

Things did not go as well for Lafayette in the second half as Brandon kept the pressure on with a goal from Alexis Lowe to give the Bulldogs a 2-1 lead.

It got worse for the Commodores when defender Madison Lee was hit with a red card, causing Lafayette to finish the game with 10 players. Brandon took advantage with Jones adding her second goal and Olivia Taylor scoring as well.