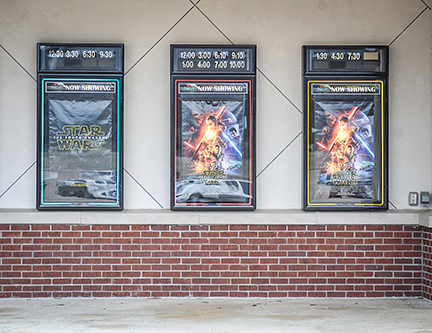 It was the opening weekend for the latest film in one of the highest grossing movie franchises of all time, and many Oxford residents went to the Malco theater in the old mall on Jackson Avenue to relive their childhood and watch “Star Wars: The Force Awakens.”

There were even some Star Wars fans from out of state who caught the movie this weekend.

James Kelleway, 32, who is originally from England, said he enjoyed the film.

Kelleway said he felt the film was well written and well paced.

“Overall, it was great,” he said. “It was the right mix of action and storyline without ever feeling like it dragged at any point.”

Florida native Michael Long, 38, said he approves of the film.

“It was hyped pretty big beforehand, and I think it lived up to it,” he said.

Long said he enjoyed seeing some of the original actors in the new movie.

Maxey said he was too young to see the first two original Star Wars films, but he did see “Return of the Jedi” in the movie theater.

He enjoyed the fact that the movie bridged the new and original films.

“I thought (director) J.J. Abrams did a really good job of using a lot of the same themes that were in Episode IV,” he said. “It just felt like an updated version.”