THE DART: Williams enjoyed growing up on a farm, raising cows 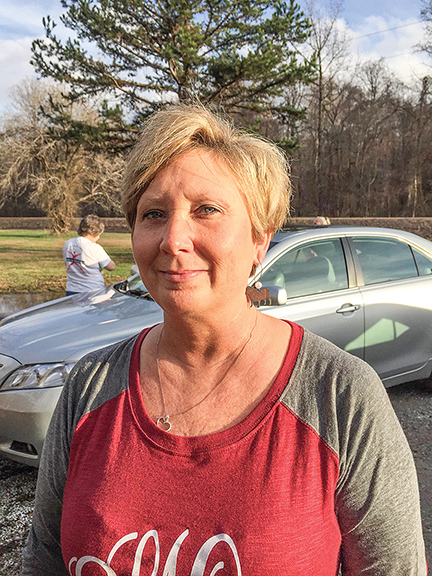 Pontotoc native Sherry Williams, 48, was standing outside the Philadelphia Community Center Saturday afternoon with a group of her family members who were hugging and saying goodbye to one another.

They had spent the morning together during a family Christmas celebration in the building that once housed Philadelphia School, grades one through six, in Lafayette County.

“Today, we were having our Williams Christmas,” she said. “It’s my husband’s family. He has 13 living brothers and sisters. All of them were here today.”

Williams, who wore a monogrammed T-shirt and Mississippi State University bulldog earrings, said she grew up in Pontotoc County, where she showed dairy cows as part of the 4-H Club.

“That was my thing that kept me going and doing,” she said. “It kept me out of trouble.”

Williams said she was raised on a farm.

“I always had cows and stuff around,” she said, “and I just got into doing that. My dad went all the way up into Tennessee, and he would buy me the rescued Jersey cows. I’d teach them and show them.

“You would have to lead them with the rope, and, of course, you always bathe them up real good, and clean their ears with cotton swabs. You have to learn to set them up so that their back is straight.”

Williams said she often entered her cows in the Prettiest Cow Contest and in competitions in Union, Lafayette and surrounding counties.

“I enjoyed meeting different people, and we went all over different places — Jackson, Kosciusko and the Dixie Nationals. It was really nice meeting a lot of different friends.”

When she wasn’t showing cows, Williams said she enjoyed basketball.

“I wasn’t a big player, but I enjoyed playing,” she said. “I enjoyed sitting on the bench.”

She has worked for Ashley Furniture in Ecru the past 21 years.

“I am a lead in the CAD (Computer-Aided Design) department, where we actually take and lay out patterns on the computer, and we send it overseas to Vietnam,” she said.

Williams said she attended college for a year and studied computing. Then she became employed with the furniture factory.

She has also helped her father throughout the years as a cook in the restaurants he owned. She said he is the former owner of J.T.’s Cafe in Ecru.