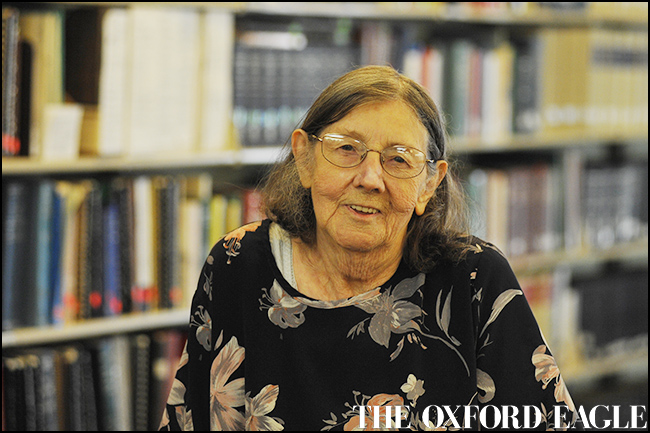 Bruce Newman Maxine Karr, a Tula native, has lived an interesting life that has taken her all over the United States, as well as Japan, before returning home where she now enjoys doing genealogy research and working with the local historical society.

When you start doing genealogy research, you never know who you’ll find in your family tree.

It could include anyone from country farmers from the Lafayette County community of Tula to King James of England, or a professional athlete known as the only baseball player to ever pinch-hit for Babe Ruth.

Tula native Maxine Karr, 86, has led an interesting life that took her from Lafayette County all over the United States and to Japan before she returned to Tula, the community in which she was born and raised.

Since joining the Church of Jesus Christ of Latter Day Saints, she has also been an avid genealogy researcher, who has traced relatives back to England with a possible link to King James.

She also once corresponded about ancestry with Samuel Bruce “Sammy” Vick, a major league baseball player who played for the New York Yankees and the Boston Red Sox from 1917 to 1921.

Vick, a Batesville native who attended Millsaps College in Jackson, is Karr’s relative through the Vick family line that she has researched.

“The Genealogy Society in Utah is probably responsible for more data collection than anywhere else, because families are important,” said Karr, seated on the sofa of her Tula home in front of her laptop. “Families, we believe, are forever. The family unit is promoted by our Savior.”

Karr said she’s traced some of her family lines back to the 1500s.

“Some, I’m still blocked on,” she said. “One of my great-great grandmothers was a Parks, and everybody wants to put her in with the Oxford Parks, but she does not belong there.

“I still have not found who her parents were. I can’t pick her up, except that she was not born in North Carolina. She was born in South Carolina, so she belongs somewhere in that Laurens County, South Carolina, Parks family, but I haven’t found the right one.”

Today, Karr does most of her research on her laptop where she is a member of Ancestry.com and Family Search. She said most of her family lines can be traced back to England, and she said most people in North Mississippi are of Scotch-Irish descent.

“I was interested in genealogy research before we came home,” Karr said, “but traveling all over the world, I couldn’t do much.”

Karr was born in Tula right across the road from her current residence in 1929. Both of her parents were farmers from Pontotoc County, where her two oldest sisters were born. She and her youngest sister were born in Lafayette County.

“My mother grew her own vegetables and canned for the winter throughout our lives,” she said. “We had the best of any world possible.

“When my father died in 1936, we spent an awful lot of time going back to Randolph on the weekend. Mother never even thought to lock the door. We did not have any worry at all about anything, and it was just a nice world. We roamed these hills, miles and miles of them.”

Karr’s life was impacted by the war.

“World War II came along and changed everything for everybody,” she said. “The boys and men went to war, and the women went to work. It was a changed world.”

Two of her sisters moved to Memphis, and one lived in a boarding house where she met Karr’s future husband, a young man from nearby Taylor, Mississippi.

“His folks were not strangers,” she said. “His grandfather lived in Taylor, and they were close. Most of our courting was done through the mail. We wrote back and forth through the war, and we were married in May after the war.”

Karr said her husband spent all of World War II in the Pacific.

“He was on gun boat, and when it was destroyed, he was on a mine sweeper,” she said. “He went through all of World War II without a scratch, and after we got married, and were about to have our daughter, he gets hurt.”

Karr said they were living in Tula, and her husband was working at a sawmill.

“The belt broke,” she said. “He reached over to turn the engine off, and the belt came around and caught the arm, and slung him around a tree. He wasn’t released from the veteran’s hospital for three years. He had 21 operations on his arm alone.”

The couple later moved to Memphis, where she worked in a grocery store. Her husband worked for the railroad a while, but wasn’t happy.

This time, he was in the Air Force specializing in weapons and electronics. The couple was first stationed in Myrtle Beach, South Carolina.

“We moved quite a bit for a long time,” she said. “The last place was Rapids City, South Dakota. I really enjoyed that. The Black Hills are fascinating. I’ve seen every part of every place we’ve ever been.”

In the early 1960s, the Karrs moved to Japan, where Maxine Karr confronted some of the beliefs she had adopted about the Japanese following World War II.

“I learned to really appreciate those people,” she said. “Of course, I grew up really during World War II, and I had a little bit of trouble giving the Japanese people a chance – not that I did anything or said anything. But I did a lot of thinking when we first moved over there.

Karr said she and her husband eventually moved back to Tula after her husband finished up several tours in Vietnam because of her aging mother. He retired in 1973, and she worked 20 years at a grocery store in Oxford as a manager who handled money.

The Karrs have two sons and a daughter, Ruth Ann Prather, who recalls living in South Carolina, Nevada, Japan, Florida and Colorado before moving to Mississippi.

“I came down here to go to college and never left,” she said.

Prather graduated from high school in Denver, and got an apartment at 18.

“My father gave me a stipulation,” she said. “He said if I get sent to Vietnam, you have to go back to Mississippi and go on to college.

“One morning, Daddy knocked on the apartment door, and I was half asleep. He threw down the orders on the coffee table, and I didn’t even have to look. I knew what it was.

“I said, ‘When do I leave?’ So I came to Mississippi because my dad volunteered to go to Vietnam to make me go to college.”

Today, Karr said she spends most of her time conducting genealogy research.

She has been a longtime member and treasurer of the Lafayette County Historical and Genealogical Society, an organization she hopes will attract a new generation of family researchers.

“I do a lot of work for everybody,” she said. “That’s what we do in this historical society. We’re getting so old now. We need some new people interested.”