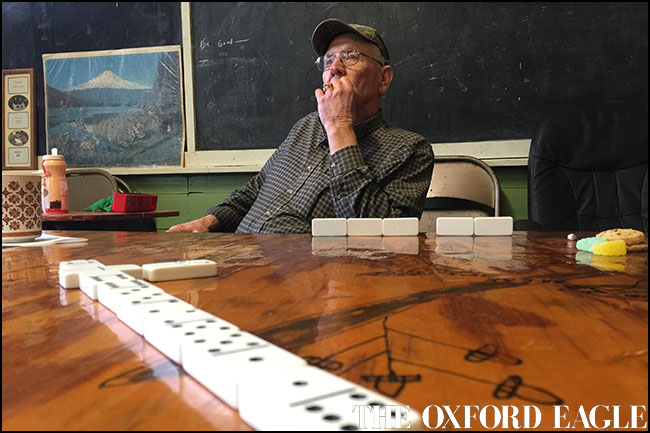 Billy Russell sits at a table inside the center after playing dominoes with a group.

It’s right before lunch inside the old Philadelphia school building off Highway 30 in Lafayette County. Visitors are seated at round tables. Some sit quietly, seriously studying a hand of cards. Others have made a long line of dominoes across the table.

Lafayette County native Arah Sneed, 79, is the manager of the community center located right next to the Country Bumpkin gas station that is no longer in business.

The community center welcomes retirees from Lafayette and its surrounding counties for fellowship, to play games and have meals. It’s open Monday through Friday from 10:30 a.m. to 1:30 p.m., and the center once housed Philadelphia School.

The first- through eighth-grade facility was in operation before area schools were consolidated. Sneed said it’s now known as the Congregate Meal Site and has been for 35 years.

“One time, we had a bus that would carry most of our crowd,” she said. “We would go to different places.

“Now we don’t have a bus here, so we’re pretty much stuck here. We play dominoes and cards. We have played bingo a few times.”

Sneed said about 25 people are registered members, but they usually feed about 20 people a day, serving meals around noon. A van picks up a few people who do not drive.

“I have really enjoyed it through the years,” Sneed said. “I’ve seen a lot of people come and go, and now I’m one of the old ones.

Sneed, who mostly worked as a stay-at-home mom throughout most of her life, said she began coming to the center about 30 years ago.

She said the center currently faces a few challenges. Those who come usually congregate in a bigger room, but part of the ceiling recently fell in and it is now under repair, so they are meeting in the kitchen. She said the county is usually promptly responsive to the center’s needs.

Another problem they have encountered is people who drop off animals outside of the center.

“Somebody keeps dropping cats off here,” Sneed said. “At one time, we had 15. Right now, I don’t think we have but six.

“They need to be spayed really bad. It’s horrible. I don’t know why they think this is the best place to drop off cats. And some of them are really skiddish, and you can’t catch them.”

Sneed said the center could use a new van with plenty of room to transport people to and from the center.

She encourages community members who live near the center to attend.

“It’s really good for old people to be with other people,” she said. “A lot of them get stuck at home, and that’s not good for you.”

Former truck driver Billy Russell, 68, who worked for Lafayette County for many years, said he enjoys coming to the center to spend time with friends and play dominoes.

“I’d rather be here than in the best hospital or nursing home in the country,” he said. “I’ve been coming five or six years. I started coming with a friend. He passed away, so I kept coming.”

Linda Beard, who worked in a furniture factory for many years before retirement, also visits the center regularly.

“I had to retire early because of my health, and I came here for a while before I was old enough to come, but I’ve really enjoyed it,” she said.

“There are sometimes when I just don’t feel like going, but I try to come. I had an illness not too long ago that kept me home for a while, but I was very anxious to get back.”