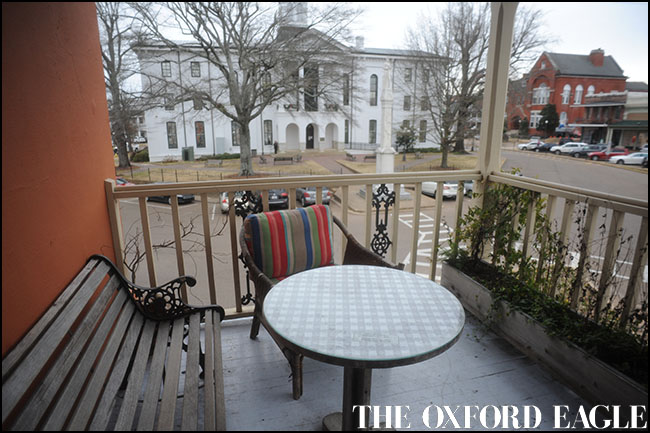 Bruce Newman Even in the winter, Square Books’ balcony provides a spot for lovers, friends, students, writers and just your everyday person to enjoy peace overlooking the historic Square and has for more than 25 years.

Square Books owner Richard Howorth sits in front of a laptop and a colorful stained glass window that features the image of a small book.

His office on the bookstore’s second floor is a space with history, character and high ceilings. Some books are stacked on desks, and others — like a Faulkner collection — are locked in glass cabinets on the wall.

Howorth and a colleague are searching the office for a book of photographs with pictures of Square Books before it was transformed from a drugstore into one of the “greatest bookstores in America,” according to Publisher’s Weekly, which named it Bookstore of the Year in 2013.

They are also on the hunt for a pamphlet, eventually found underneath a chair, that shares the following history of the Square Books balcony:

“For more than 25 years, readers and writers from Oxford or afar, Ole Miss students, and Mississippi writers have enjoyed a quiet, solitary morning with a cup of coffee or an afternoon meeting with lovers and friends on the balcony outside the second floor of Square Books overlooking the historic Square,” Howorth writes. “It is here where writer Josephine Humphreys once remarked on a breezy morning in May of 1991, ‘This must be the center of the universe.’”

Many book conference events also have taken place on the balcony. Howorth said publisher Seymour Lawrence once invited all his authors to Oxford for the weekend.

“The iconic photograph of Barry Hannah wearing braces, round sunglasses, and that killer smile of his was taken on the balcony, as were many press photos of Larry Brown for his first book ‘Facing the Music,’ with the Fortune’s Famous Ice Cream sign in the background,” Howorth said.

He said the Square Books balcony is a favorite spot for viewing Christmas and Independence Day parades, and at least three weddings and numerous marriage proposals have taken place there.

Howorth said the building was originally a dry goods store on the ground floor, and later a drug store owned by at least three successive families — the Furrs, Rolands and Blaylocks — with offices on the second floor.

“Back in the days when the Square was the only commercial district, all the lawyers, dentists and real estate people had their offices in the upstairs,” Howorth said.

“In the mid-20th century, many of the second-floor tenants on the Square, and most of the upstairs locations around the Square were unoccupied,” Howorth said. “Sometime in the 1960s, the balcony was demolished, and the windows and doors on the second floor exterior were plastered over and painted as a way of reducing maintenance expense.”

Howorth bought the building in 1984 from Mrs. Nolan Blaylock, renovated it, and occupied it in 1986.

He said the previous owners tore off the balcony because it was an expense to maintain. He used the photography books Faulkner’s World and Faulkner’s County by Martin J. Dain to help design a balcony reconstruction as a replica of the original.

“We used that photo to basically rebuild the balcony,” Howorth said, holding open the book Faulkner’s World to a page featuring a historic photo of Square Books.

“You see the Fortune’s Ice Cream sign, which we left on the building, because it was kind of an icon of the Square,” he said.

“You can also see the string of colored lights. In the old days, they strung Christmas lights from the tops of buildings around the Square to the cupola of the courthouse. If you were driving out of town, or if you were up . . . where Kroger is, you could see a tent of colored lights on the Square.”

Howorth said, because the balcony is over the sidewalk, it’s technically over public property.

“I went before the city board in 1985 to ask permission to rebuild the balcony,” he said, “and they immediately gave it to me, because they were grateful that the building was being restored to its original form. I told them I would make the balcony a place that was accessible to the public.”

Howorth said people sometimes come out on the balcony for parades and the Double Decker Arts Festival.

“People come up here all the time to have a cup of coffee and sit out there,” he said. “We’ve had several weddings, including one just a couple of weeks ago, on the balcony. There have been numerous engagements out there.”

A few years ago, the city required Square Books to modify the balcony by replacing the 25-30-year-old decking.

Howorth said: “When the carpenters were taking up the decking, one of them said, ‘Do you mind if I take a piece of this home to my sister-in-law? She said she used to come up here all the time when she was a girl, and she just wanted a piece just as a keepsake.’

“I kind of went (Howorth motions an idea). And so we printed this thing (the pamphlet) and sold the sticks for $5.”

The pamphlet, which doubles as a certificate, reads: “Let it be known that the holder of this certificate owns an authentic piece of the historic Square Books balcony, and is entitled to all the rights and privileges of said ownership.”