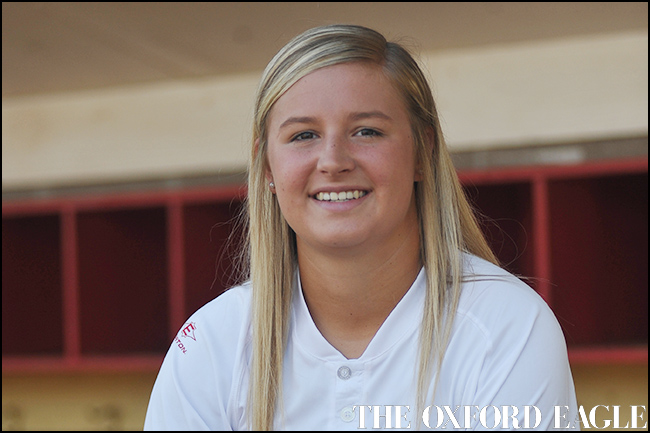 Lafayette High softball player Emily Robinson, in Oxford, Miss. on Monday, June 29, 2015, is the Oxford Eagle's player of the year for 2015.

“It’s been a long time to get here, and I’ve always looked up to the girls who have sat in that seat and signed right there,” Robinson said, motioning to a National Letter of Intent on top of a table inside the Lafayette High library Friday morning. “Now it’s my turn.”

Robinson’s wait ended a few minutes later when she signed a softball scholarship with Jones County Junior College. The Commodores’ senior shortstop had offers from virtually every junior college program in the state before ultimately choosing Jones over East Central — a decision she made in July but couldn’t make official until Friday, the first day junior college signees could put pen to paper.

“It’s kind of like a dream come true, you know,” Robinson said.

Robinson, the reigning EAGLE Player of the Year, has started for the Commodores’ varsity team since the eighth grade. A constant force in the middle of Lafayette’s lineup, Robinson hit a team-high .544 and drove in 34 runs last season while also leading the Commodores in doubles (16), triples (3), homes runs (6) and runs scored (41).

Robinson ended the season with a whopping 1.642 OPS, which is a sum of a player’s slugging and on-base percentages.

“Probably one of the best (players) I’ve ever coached in my nine years,” said Lafayette coach Katie Moore, whose first year at Lafayette was Robinson’s eighth-grade year.

Robinson said the environment at Jones fit her the best out of all of her suitors as “the coaches were Godly and the program is based off that. No matter what the situation is, they’re always going to put God first. That’s the program I want to be with.”

Jones is also used to winning under head coach Chris Robinson. The Bobcats, who have won three of the last four MACJC state championships and advanced to the NJCAA Division II national tournament in 2014, went 41-6 a season ago and finished the year ranked second nationally in the NJCAA Division II poll.

Robinson’s ultimate goal is to “play Division I in the SEC,” she said, but she’ll first have to earn playing time at her new home among a talented roster in Ellisville once she finishes her final season at Lafayette this spring.

“I know we’re all going to be fighting for a spot (at Jones), but we’re all going to be friends with it,” Robinson said. “I feel like if you practice hard enough, you’ll get that spot.”
Robinson was recruited as a utility player by the Bobcats’ coaching staff, and the versatility to play nearly anywhere on the diamond could help her get on the field quicker at the next level.

“That’s where she’s a selling point,” Moore said. “If it’s second (base), if it’s short, if it’s third, if it’s the outfield, she’s going to go out there and do it and work harder than somebody else.”