Scotts enjoy volunteering, helping others at The Pantry 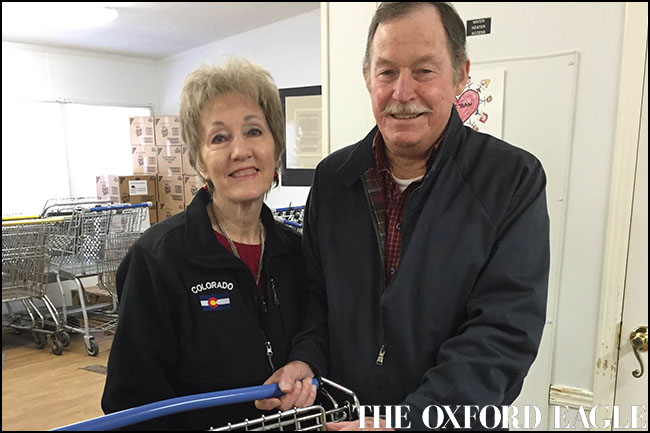 LaReeca Rucker Kentucky natives Tom and Linda Scott, who moved to Oxford in 1970, volunteer at The Pantry.

Kentucky natives Tom and Linda Scott, 78 and 69, respectively, moved to Oxford in 1970 when Tom got a job with Emerson Electric.

Today, the two are volunteers for The Pantry, an organization that provides food to needy families in Lafayette County. The Scotts help with home-bound delivery.

“These are elderly people who are not able to get out on their own, and we deliver to them,” said Tom Scott Tuesday, while pushing a buggy inside The Pantry as he shopped for one of the homebound clients.

“Our homebound deliveries are done the first Tuesday of every month, but our church has The Pantry the whole month of August.”

Tom Scott said a fellow member of St. Andrews United Methodist Church of Oxford, who was one of the founding organizers of The Pantry, got him involved with the organization.

“He was big in getting The Pantry started years ago,” he said. “When I retired, I came down to work with him. He’s passed away now, but he felt very passionate about The Pantry.

“You are helping people who are not necessarily just desperate, but who don’t have the income to do what we are able to do. It helps them supplement the income.”

Tom Scott said many clients have left a lasting impression.

“Years ago, there was one woman,” he said. “She was probably 90 pounds. Her husband had just had a heart attack, and their house had burned. I carried her through The Pantry. She was so emotional. Every can of food I gave her, she was just so appreciative. I remember people like that.”

Linda Scott said she and her husband began working with The Pantry in 2000.

“We go to St. Andrew’s United Methodist Church, and we started doing volunteer work, because they were already associated with the food pantry,” she said.

“Right now, we do the homebound delivery. We help do the ordering. We develop a relationship with (the clients.)”

Linda Scott said they are currently delivering to a 92-year-old retired teacher.

“It’s nice just knowing you are helping someone else who can’t help themselves,” she said. “When they get ready to leave, you can tell the ones who give you a hug.

“Those are the ones you kind of get emotional about and feel close to. They are just so grateful to be able to get all of this food.”