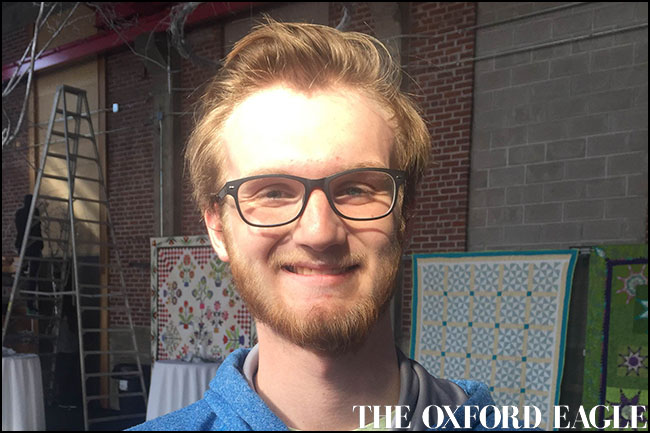 Saturday, he was found inside the Powerhouse with fellow student council members who were helping decorate for the school’s winter formal held later that night.

“Everyone here is on student council in some capacity,” said Bartholomew, whose favorite subjects at OHS are AP chemistry or AP European history.

Next year, he’ll be attending the University of Mississippi, but Bartholomew said he can’t decide what to study. It will be either pre-med or accounting.

“My dad is a pilot for American Airlines, so we’ve moved around a lot,” said Bartholomew, who was born in Meridian. Since then, his family moved to Dallas, D.C. and St. Louis before relocating to Oxford.

He said one of his earliest memories is living in D.C.

“One of the earliest things I remember is Labor Day weekend,” he said. “The whole neighborhood had a three-day water gun fight with water balloons and water guns. We had a water balloon catapult.”

Bartholomew said moving to Oxford was a big jump.

“But we’ve always come here for games and stuff,” he said.

His mother is from Meridian, and his dad grew up near Philadelphia.

“My mom has two sisters here,” he said. “We decided to move near family.”

He said he’s glad he had the opportunity to live in Oxford so that he could compare what life is like living in a big city to a small town.

“I think it will help me eventually if I ever have to move around a lot, to know how to get acquainted,” he said, referring to living in a small town life. “I see people a lot more, just randomly. I know people a lot better. It was great to learn to drive here, because it’s easy to remember places.”

Bartholomew said his senior year has been going well so far.

Students have helped plan and organize homecoming and the winter formal.