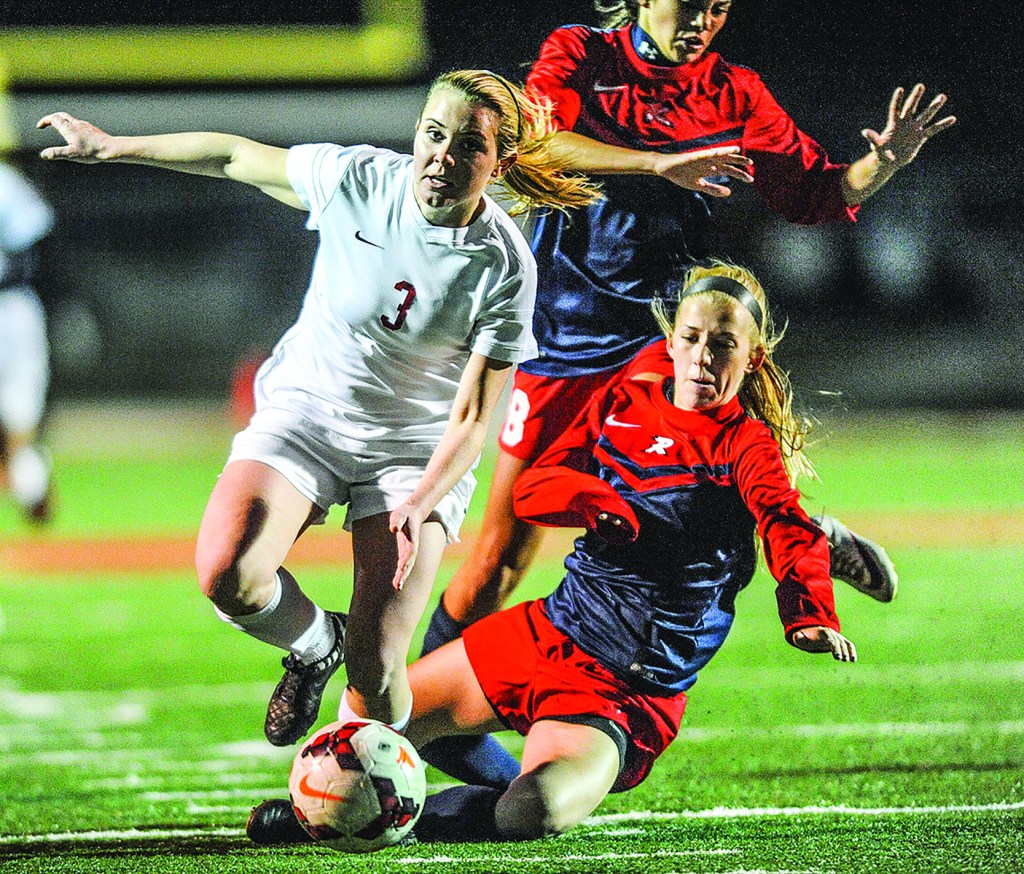 Lafayette High's Alley Houghton (3) breaks free from Richland's Aubree Patterson (6) and Julia Bain (8) in the MHSAA Class 4A North Half playoffs in Oxford, Miss. on Wednesday, February 3, 2016. Lafayette won 3-2 to advance to the state championship.

Alley Houghton started her birthday by signing with the Ole Miss soccer team. She ended it by earning her team a spot in its second state championship in as many years.

Houghton scored a late goal in the second overtime period as Lafayette defeated Richland 3-2 in the MHSAA Class 4A North Half title match Wednesday at William L. Buford Stadium.

It is the second time in as many seasons the Commodores beat Richland to advance the state championship match where they will face West Lauderdale at noon Saturday at Madison Central High School.

“It’s kind of like I wanted this one more because I knew how it felt last year,” Lafayette coach Melinda Scruggs said. “I think I wanted it, too, because they put the work in and they deserve it.”

The match did not get off to the start Lafayette hoped for as a misplayed ball by goalkeeper Ana Branch was recovered by Richland’s Savanna Young, who deposited it into the back of the net for a 1-0 lead six minutes into the game.

Alley’s sister, Maddy, inserted herself into the match with an improbable goal from 35 yards away. She kicked a ball high into the air, and as it came down, the Richland goalkeeper batted it backwards into the net at the 28-minute mark, tying the game 1-1. The score remained that way through halftime.

The tie was short-lived coming out of the break as Alley scored what would be her first of two goals one minute into the second half. Richland answered eight minutes later to make it a 2-2 game.

From there, it was a second half that saw Lafayette fighting to keep its season alive, fending off a relentless Richland attack that was nothing like the Commodores had seen in their previous encounter on Dec. 19.

“(Richland) is definitely a very good team,” Scruggs said. “They were on our half of the field for a while. We just had to keep fighting them off. I think they still played the same. We played them in December the third game of the (Oxford) Showcase, and we were both tired. It’s a totally different ballgame when both teams are fresh.”

The final 39 minutes of scoreless action sent the teams to two 10-minute overtime periods. Lafayette threatened late in the first period but could not score.

That changed in the final two minutes of the second overtime when Alley dribbled down the end line, shooting a rocket that ricocheted off the goalkeeper for the winning score.

“I wanted to win it by more, but I’m just glad we pulled it out,” Alley said. “I knew we could hold them once we scored. I think I caught the defense off guard because I only had one defender to dribble through, and I just shot and kicked it as hard as I could and made it through.”