A groovy kind of book fair at DDES 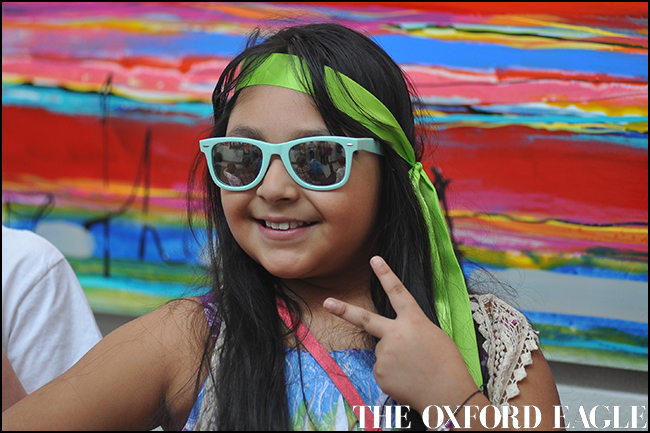 Peace, love and reading was the groovy theme of a colorful book fair held Saturday at Della Davidson Elementary School in Oxford.

Librarian Wendy Raby, 34, has been a teacher for more than a decade. The Winfield, Alabama, native moved to Oxford in 2007 and worked at Della Davidson through 2012 before accepting a position as a middle school teacher.

This is her first year back at Della, and she wanted to make the annual book fair a special event.

“I decided that I wanted to do two book fairs to raise money, because we need books for our library,” Raby said. “So this is kind of one of our ways of getting that money.

“Then I started thinking about what we could do with a groovy theme. We just kept thinking of ideas, and today was the first day. We have had so many events with bingo, musical chairs, face-painting.”

Raby said she wants to continue making the book fair special for children.

“I’m trying to make it big and make it fun for them to come, so that they just don’t come and buy books,” she said. “They get to come and participate in other activities.”

The book publisher, Scholastic, sent the school many books to display on tables and sell.

“What we sell, we get profit off of, and what we don’t sell, we just send back,” Raby said. “So they make it a really easy process.”

“I really wanted the Grace book,” she said, referring to an American Girl doll character. “I have her ‘before’ book, but I need her ‘after’ book.”

Her brother, Rowan Martin, 10, was also at the event.

Those who had their picture taken on the Volkswagen Beetle van received a free strip of photos to take home.

Alice Williamson, 8, was found coloring a picture at a table. She said she likes “chapter books that have animals” in them.

The book fair room was decorated with a groovy 1960s theme.

“All of the decorations are just things that we’ve come up with,” Raby said. “We’re just trying to make it fun for the kids.”

The event also featured a costume contest, musical chairs and a parade around the school.

“They think it’s really cool that the library looks like a totally different place,” Raby said. “It’s so colorful and inviting. We have a coloring table, and a lot of the children have wanted to color on the table, so I’ve decided our paper that’s on the table is going to be our background for my next bulletin board. I’ll take pictures from today, post them on the bulletin board outside and let the kids reminisce about today.”

Raby said sales for the last book fair neared $17,000, and the school received a percentage of sales.

Raby said “Diary of a Wimpy Kid” is one of the most popular books in the school library now. She’s also had trouble keeping Minecraft books in stock, as well as worldalmanacs and record books.