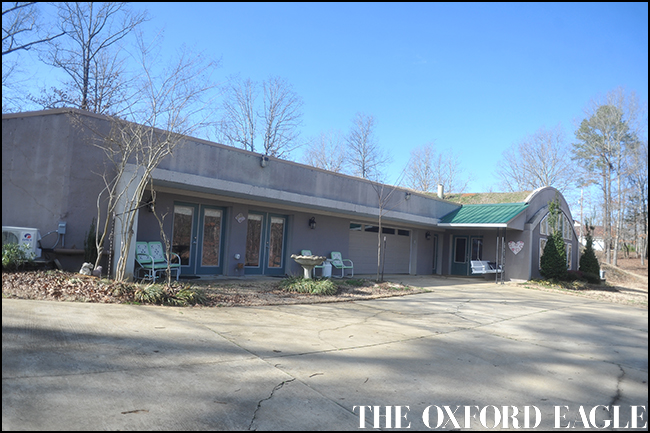 Bruce Newman The Burrows is located in Lafayette Springs near Oxford. The bed and breakfast is also home to Harvey and Sherry Shirley who built the underground house.

Lafayette Springs resident Harvey Shirley, 56, may be one of the only people in Mississippi who has driven a truck on the roof of his home.

During the spring and summer, he frequently mows the roof. And once cows from a nearby pasture escaped and grazed on top of it.

That’s because Shirley and his wife, Sherry, own an underground house, or what some might consider a storm shelter mansion.

It is also a bed and breakfast called The Burrows.

Harvey Shirley, a Horn Lake native, grew up helping his father build houses, but he wanted to become a pilot. After beginning work in the mail room at FedEx, he later earned his wings and began flying for the company delivering packages worldwide before retiring three years ago.

The Shirleys moved to Como in the mid-1980s and refurbished an antebellum home, but Harvey Shirley had always wanted to build an underground house.

“I just thought it would be a neat way to live,” he said. “It’s energy efficient. I just kind of thought it was the way to go.”

The couple moved to Lafayette County about three years ago after Harvey Shirley’s retirement and fulfilled his lifelong goal of building an underground home. It is embedded in a grassy hill with the dining room and den facing a pond through a large window.

Sherry Shirley, 54, said her husband is a researcher, so they traveled to Minnesota to speak to others with underground houses before building theirs. They found a company there that constructed underground homes with dome roofs and guaranteed waterproofing.

Harvey Shirley said he believes there are more underground homes up North and out West. He said the closest one built similar to their home is near Atlanta, but there are at least two other underground homes near Batesville he’s aware of. One was built 50 years or so ago. The other was recently built.

There are advantages to living underground.

“We don’t even hear thunder until it gets out east of the house,” Harvey Shirley said. “Even with an earthquake, they said the house will move with the ground.

“No matter what it does outside — it can drop down to 10 degrees for a week, and it will never drop below 60 or 65 degrees in the house here. It’s never really cold or really hot. You don’t have to worry about the pipes freezing.”

And the Shirleys are never worried when tornadoes strike.

“One year, my daughter called us while we were in Hawaii,” she said. “They were having a tornado party. All it could do is break the front, so you’d just have to go in other rooms.”

Some neighbors even speculated they were building a storm shelter.

Students are back on campus, gearing up for class